Three men created pink gloves to dispose of tampons. The German men behind Pink Gloves are being dragged on social media for what many are calling female body-shaming and period-shaming concepts. 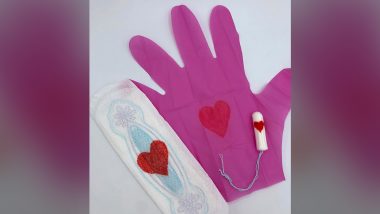 We don’t know where and how to even begin! For starters, three men created pink tampon disposal gloves for women. Let that sink in first. The German men behind Pink Gloves are being dragged on social media for what many are calling female body-shaming and period-shaming concepts. The product is intended to prevent people from getting menstrual blood on their hands while removing tampons or other period products. Really? The invention did not go well with women on social media, who went on accusing the men of ‘mansplaining’ periods and contributing to the discourse that periods are dirty, shameful and must be hidden.

Many myths already surround menstruation, and that period blood is dirty is one of them. While women continue to battle the taboos associated with periods, men like these so-called entrepreneurs are a reminder of how little knowledge society has about menstruation. It’s no rocket science to dispose of tampons—you pull the string, wrap it in tissue and stick it in the bin. That’s it! According to reports, the men claimed that they created the product after speaking to female housemates about the challenges of disposing of tampons.

Dr Jennifer Gunter shared screenshots, the texts translated from German. The posts explain that two of the founders met in the army before moving into women’s flat, where they noticed that “there seems to be no good solution when it comes to disposal of tampons.” This is how they come up with a “solution.” Man Compares Menstrual Cramps With Ankle Twist in Viral Tweet, Netizens Asks Him to Shut the F**k Up.

Here Are the Screenshots

So these dudes designed pink gloves so tampons and pads can be disposed of properly and discretely. I shit you not. (The text is translated from German). pic.twitter.com/cn5spME2OT

Social media users are mad, and the three men are blasted. ‘Pinky Gloves’ continue to trend online, with netizens criticising the product and the men behind it.

Now You Know Why

Me: what are #pinkygloves and why is everyone so mad?

i don’t know what to point out first...the pink colour? the name “pinky”? the perpetuated idea that periods are nasty? the fact that they think gloves are needed?! the fact that, i assume, this is a period product made by three people who don’t menstruate? how?? https://t.co/qseYWWstLN

So ladies if you haven’t heard.... in recent news #pinkygloves were a product men designed to make money off of women’s periods all because they think it’s unsanitary and gross. pic.twitter.com/Dw5x5U1Jev

After receiving the backlash, Pinky Gloves issued a statement on Instagram, where they apologised for their ‘big mistake,’ noting that the feedback is taken seriously. There is sure a lot to learn. But first of all, the product is not really needed, and it highly stigmatizes people who menstruate.

(The above story first appeared on LatestLY on Apr 17, 2021 11:49 AM IST. For more news and updates on politics, world, sports, entertainment and lifestyle, log on to our website latestly.com).