Man Compares Menstrual Cramps With Ankle Twist in Viral Tweet, Netizens Asks Him to Shut the F**k Up

A Twitter user is facing backlash, for all right reasons, as apparently, he thought period pain is nothing if compared to an ankle twist. And he dared to ask girls if menstruation cramp is even close to the suffering of one ankle twist. Naturally, Twitterati lost their mind and asked him instead shut the f**k up! 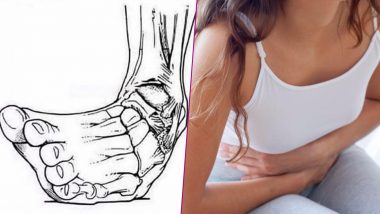 Men should stop giving their opinion on something that they will never experience. We are not generalising it, but most of them come out with such ridiculous mansplanations that piss us off. Notably, about periods and childbirth! No matter how woke a man is, these particular physical experiences that women go through, even the most empathetic men will never truly understand. For instance, a Twitter user is facing backlash, for all right reasons, as apparently, he thought period pain is nothing if compared to an ankle twist. And he dared to ask girls if menstruation cramp is even close to the suffering of one ankle twist. Naturally, Twitterati lost their mind and asked him instead shut the f**k up! Stefan Molyneux Tells Women to Get Married Young and Have Babies in a Viral Tweet.

Sharing the image of a twisted ankle, Twitter user @Datguyserious writes, “Girls wana be talking bout period pains. Have you ever rolled your ankle over like this?” Boy, if both of your ankles twisted at the same time, the pain will not even be close to the menstruation cramp that women experience every month. And in that case, you can imagine being a female athlete, model, actress, journalists and every other profession that women are excelling. In response to his ridiculous question, women and men too, across the internet did not hesitate to put him in his place. The Twitter user received a massive flow backlash, and his tweet of comparison between period pain and ankle twist has gone viral. Beat Period Pain and Cramps With Fennel Seeds.

Girls wana be talking bout period pains. Have you ever rolled your ankle over like this? 😱 pic.twitter.com/lf8TJ5a4Ty

Honey, consider what a period IS.

Imagine that your arm tissue is preparing for a massive, nine month work out frenzy. For 3 weeks it grows blood vessels, builds infrastructure that will support all the ABSURD demand for oxygen and nutrients that you're gonna put it through.

Lol. Yeah, you know, women sometimes sprain their ankles too. I'd much rather sprain my ankle (BOTH of my ankles) than have to go through 40 years of periods again.

You do this to your foot monthly for 7 days each time? Apparently you have zero understanding or appreciation of what your mother endured to birth you. And after all that effort you’d hope she ended up with a better person than you present yourself as.

You Want to Know More, Sir?

I've rolled my ankle at least 10 times it's nothing like my period. I have to get an exploratory surgery next week to see if I have endometriosis (I'm allergic to anesthetic that's how serious it hurts). My uterus spasms even when I am not having a period at all. I lose so much

blood that I have severe anemia and need to get blood transfusions and take iron pills that causes serious stomach issues just to keep me alive. I am 30 years old and I will have to get my tubes tied. I also have PCOS that means sometimes instead of coming out my body makes

Why do you even try? Period pain can result in more than only irritating cramps for a number of days (mostly seven) straight, every month. Many women suffer from dysmenorrhea which results in incapacitating periods. Again some experience polycystic ovary syndrome (more commonly known as PCOS) which affects women in several ways. It can impact the skin, hair growth, fertility and periods. Menstrual cramps are caused by an excess of prostaglandins (compounds that are released from the uterine lining). They are a necessary part of the process, but they cause excessive pain. So, no uterus, no opinion!

(The above story first appeared on LatestLY on Nov 11, 2019 10:58 AM IST. For more news and updates on politics, world, sports, entertainment and lifestyle, log on to our website latestly.com).