The highest-paid YouTube stars of 2020 have been revealed and on top of the list is a 9-year-old boy. Ryan Kaji's videos where can be seen unboxing toys is No.1 on the Forbes list. His YouTube channel Ryan's World and Ryan's World made $29.5 million this year. He made another estimate $200 million from Ryan's World branded toys and clothing. 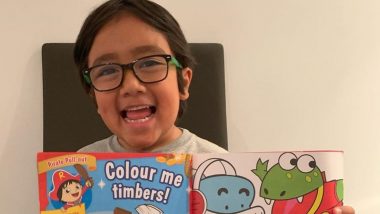 The highest-paid YouTube stars of 2020 have been revealed and on top of the list is a nine-year-old boy. Ryan Kaji's videos where can be seen unboxing and testing toys is No.1 on the Forbes list. His YouTube channel Ryan's World and Ryan's World made $29.5 million and another estimate $200 million from Ryan's World branded toys and clothing, including Marks & Spencer pyjamas. He also has signed an undisclosed deal for his own TV series on Nickelodeon. His parents Loann Kaji and Shion Kaji feature in his videos. They live in Texas, the United States. Highest-Paid YouTubers for 2018: 7-Year-Old Ryan Tops the Forbes List Among Others.

Kaji first began making YouTube videos in March 2015 after watching other toy review channels. Eventually, he began making more such videos on the platform. Today he has nine YouTube channels with Ryan's World being the most popular one with 41.7 million subscribers and 12.2 billion views. His most viewed video is Huge Eggs Surprise Toys Challenge which has more than 2 billion views. It is one of the 60 most-viewed videos on YouTube. Top Twitter Creators in 2020: From TikTok Favourites Charli D’Amelio & Addison Rae to YouTubers James Charles & Jeffree Star, Here Are the List of Twelebs Ranked!

This year, the top 10 biggest-earning YouTubers made a total of $211 million in 2020 according to Forbes business magazine. On Friday, they released their analysis of estimated earnings between June 2019 and June 2020.

The second-highest-paid YouTuber is Jimmy Donaldson or Mr Beast who earned an estimated $24 million. He is known for his stunt video and for giving away money to people. At the third place is Dude Perfect ($23 million), Rhett and Link at $20 million on the fourth, Markiplier on fifth with $19.5 million, 6 is Preston Arsement at $19 million, on the seventh is Nastya at $18.5 million, 8th Blippi at $17 million, David Dobrik on 9 with $16 million and Jeffrey Lynn Steininger at $15 million on the 10th spot.

However, Kaji and his parents have faced criticisms with many calling out child consumerism. The US Federal Trade Commission investigation has made allegations that sponsors of videos are not properly disclosed. They have also been accused of embedding consumerism in the messages and videos for children.

(The above story first appeared on LatestLY on Dec 19, 2020 09:41 AM IST. For more news and updates on politics, world, sports, entertainment and lifestyle, log on to our website latestly.com).