Finding out that the girl you have been working with all the while, doesn't exist and is dead! Creepy much? Well, that's what this 'real' ghost anecdote states. The tale of Rose is going to be made into a movie titled Rosie: The Saffron Chapter. And if that's got you curious about her story, read on. 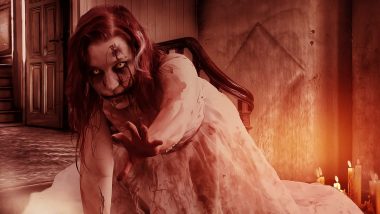 Rose, a hardworking employee in Gurugram's Saffron BPO. Now, the BPO stands atop a graveyard (that's no comforting start). A girl so good at her job, she would always meet her targets and bag the "Employee of the Month" title consistently. Her punctuality and consistently meeting her targets made her an inspiration for many. But behind Rose's hard work was an intriguing secret, that not many knew. Once while working, Rose got an inbound call which went on for more than an hour. Her team leader just barged in the call to check if she needed any support, but found that there was no one on the other line!

After this day, Rose disappeared! She went on an unprecedented leave. Now a most hardworking employee suddenly not turning up is definitely fishy. So her employers managed to trace her address via the transportation details. The first shock came in when they managed to speak to Rose's landlord. He claimed that no such girl lived there. Even the neighbours confirmed that there was no girl like Rose staying around. As scepticism grew about Rose, the employers decided to trace her family. It wasn't easy to contact them as Rose didn't share much with anyone. But when they finally made through, there were in for a shock! The family informed that Rose died eight years ago!! Sex With Ghost? New Zealand Woman Claims She is Making Out with Her Dead Boyfriend's Spirit.

The news freaked out the colleagues so much so, that Rose's best-friend from work is said to have died after a cardiac arrest. Several of the people who worked closely with Rose were also mentally unstable as they couldn't believe it. A lot of people quit their jobs from the call centre after this incident. The mystery about Rose, the dead girl living stays on. Whose call was it? Did Rose return back to her grave? Did she have some purpose in the BPO centre? The questions about her remain unanswered. We do not know if it is actually true but it has been cited as a real event in Gurgaon from years ago.

(The above story first appeared on LatestLY on Apr 01, 2021 08:44 PM IST. For more news and updates on politics, world, sports, entertainment and lifestyle, log on to our website latestly.com).