Actor-producer Vivek Oberoi has announced that he is launching Palak Tiwari, daughter of popular television actress Shweta Tiwari, to play the titular role in Rosie: The Saffron Chapter. 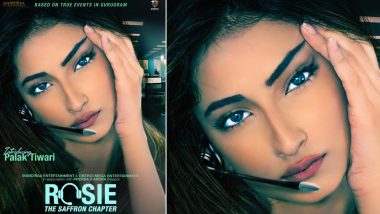 Vivek Oberoi shared a poster featuring Palak Tiwari as Rosie, who is shown working in a call center. While sharing the poster, he wrote, “And here's our mystery girl, glad to launch @palaktiwarii in & as #Rosie! Our horror-thriller franchise is based on true events in Gurugram,directed by @mishravishal. #PalakTiwariAsRosie”. Palak’s intense avatar has already left us impressed and we just cannot wait to watch her playing this intriguing role. Iti: Vivek Oberoi Announces His Production Venture With An Intriguing Poster!

And here's our mystery girl, glad to launch @palaktiwarii in & as #Rosie!

Rosie: The Saffron Chapter is produced under the banners of Mandiraa Entertainment and Oberoi Mega Entertainment. This film is based on true incidents that that took place in Gurugram. The first part of this horror-thriller franchise is based on the Saffron BPO, one of the most haunted places in Gurugram, and revolves around a girl named Rosie who was an employee in this BPO. Rosie: The Saffron Chapter is expected to go on floors in September.

(The above story first appeared on LatestLY on Jul 29, 2020 11:07 AM IST. For more news and updates on politics, world, sports, entertainment and lifestyle, log on to our website latestly.com).