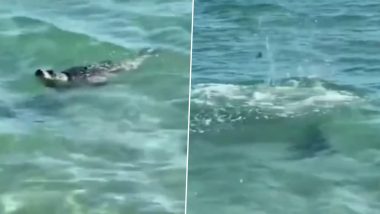 In another case of animal cruelty, video of a seal pup being pelted with stones in Kazakhstan's Aktau city has gone viral. It shows people throwing stones at the baby seal at a beach in the Aktau, located on the eastern shore of the Caspian Sea. The video shows a grey seal pup swimming near one of the beaches and as it comes near the shore, people can be seen throwing stones into the water. The video was captured by an unnamed local resident who spotted the tourists aim stones at the little seal. Kazakh authorities expressed disapproval at the incident and asked people to be sensitive and respect nature. Seals are quite curious in nature and often approach humans on seeing them.  Pregnant Elephant Killing Sparks Outrage in India; 5 Instances of Animal Cruelty Which Made Humanity Hang Its Head in Shame.

Kazakh model Yevgeniya Mukasheva shared the video saying, "If an animal comes close to you, it means it trusts you. How could you throw stones at the defenceless pup and laugh? Have you lost your mind?!" Saken Dildakhmet, a spokesperson for the Ministry of Ecology, Geology and Natural Resources was quoted as saying, "The way people acted in the video is outrageous and wild. Such an attitude can cause great damage to the fauna of the Caspian Sea and adversely affect the behaviour of these animals who may become aggressive and attack people. We ask you to show respect to nature."

Dildakhmet said, "The seal in the clip is young and playful. The seals are mostly very friendly and curious marine mammals. We should admire them." Last month in Mangistau region there were incidents of people being but by seals. Children and adults had to be rushed to the hospital and were given a rabies shot. In another incident, video of a tourist hitting a sleeping seal with slippers to wake it up had angered netizens. The incident reportedly happened at Cape Cross beach in Namibia of south-western Africa.

(The above story first appeared on LatestLY on Jul 08, 2020 10:36 AM IST. For more news and updates on politics, world, sports, entertainment and lifestyle, log on to our website latestly.com).