Pregnant Elephant Killing Sparks Outrage in India; 5 Instances of Animal Cruelty Which Made Humanity Hang Its Head in Shame

Why would someone want to do such a thing is a question that's popping in almost everyone's mind. But it is a question that comes up time and again, as the elephant killing is not one of a kind incident. There have been numerous instances of severe animal cruelty with cats and dogs as targets. Let us look at some of them. 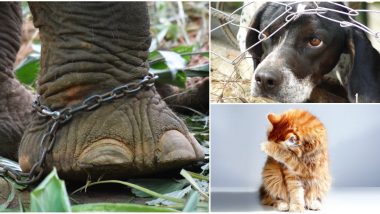 Nothing brings a group of humans outraging together, like an incident that showcases a loss of humanity. The death of a pregnant elephant in Kerala after it ate a pineapple filled with explosive has left its sparks all over the nation. While some express grief over killing through art, others are calling out for justice against the perpetrators of the heinous act. Why would someone want to do such a thing is a question that's popping in almost everyone's mind. But it is a question that comes up time and again, as the elephant killing is not one of a kind incident. There have been numerous instances of severe animal cruelty with cats and dogs as targets. Let us look at some of them.

Elephant Abuse and Cruelty in Kerala:

While the nation is already outraging over death of a pregnant elephant, it has emerged that this is the second incident from Kerala in recent months. Another jumbo apparently died a similar death in the Kollam district. In the month of April, another elephant was found with its jaw broken. Other than these incidences, cruelty and abuse towards the elephants in captive is not new. In the year 2018, 13 elephants died in just 5 months in captivity. It emerged they were subject to torture or mistreatment.

A stray dog named Lucky in Mumbai met with an unlucky death when it was beaten to death for taking shelter from the rains in a building. The guards of a posh building in Worli region beat a stray dog mercilessly on the order of one of the resident's to "set an example" for other strays. Lucky was in a coma and could not survive the beating. The incident had caused a similar outrage with celebrities also demanding justice against animal abuse. Sonam Kapoor, Anushka Sharma, John Abraham were among the celebrities who spoke out on the issue.

In December 2018, a man threw off his neighbour's pet cat from a high rise! The cat apparently was outside Shivram Panchal's residence who got so furious on seeing the feline, he flung it off the 16th floor. The housemaid struggles to stop the man but couldn't. The cat could not survive the fall and died on the spot. The incident was shared on Facebook and netizens demanded strict action against the man. Some went on to report Panchal's Facebook profile too.

In the year 2016, a police horse named Shaktiman was part of a political protest rally in Dehradun, Uttarakhand. BJP MLA Ganesh Joshi had allegedly attacked Shaktiman, and while the horse tried to protect himself, his limbs were stuck in a railing causing him a serious injury. His hind limb had to be amputated and he underwent multiple surgeries, which eventually took his life. The demise of this horse erupted a blame game and sparked outrage everywhere.

In the year 2016, two medical students threw off a puppy from a two-storey terrace. They caught the act on video and it ended on social media. The video went viral and sparked wide outrage among netizens. This incident remains distinct from the others because in this case, the animal survived. The puppy was named Bhadra and taken care of by animal activist. The two students were caught but were immediately out on bail, which angered everyone even more. Two months later, they were fined Rs 2 lakh each by the MGR Medical University.

These are just five instances, but there have been more, some of which are not even reported. All of these instances are a result of no strict punishments against such crimes. The outrage demands stricter actions but are eventually forgotten. But such cases keep happening time and again and humanity hangs its head in shame.

(The above story first appeared on LatestLY on Jun 04, 2020 01:26 PM IST. For more news and updates on politics, world, sports, entertainment and lifestyle, log on to our website latestly.com).