'Shweta is Live' vs ‘Pawri Hori Hai’ Funny Memes and Jokes: Hilarious Zoom Fail or Pakistani Girl's Party Anthem, Whose Epic Reaction LOL’d You the Most?

Netizens found a new meme-worthy caption, all thanks to Shweta. But the ‘pawri hori hai,’ funny jokes are going to stay! As you LOL at these viral memes, here we bring you some amusing 'Shweta is live,' vs ‘Pawri Hori Hai,’ funny jokes to fill your day with laughter. 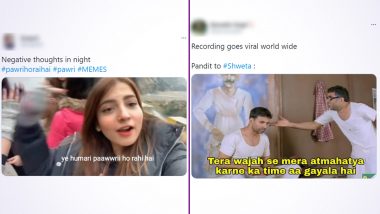 Social media and its hilarious meme trends never take a pause. Amid the ongoing health crisis or increasing online spread of misinformation, we have so many hilarious jokes and memes that tickled netizens' funny bones. A few days ago, we had the ‘Pawri Hori Hai,’ Pakistani girl's party anthem. The memes are still a hit, but now the attention has slightly shifted to the curious case of a girl named Shweta and her friend’s “sex-addict,” girlfriend. “Shweta, Mic On Hai,” is the hilarious meme trend going viral on the internet. The reactions are lit! While netizens found a new meme-worthy caption, all thanks to Shweta, the ‘pawri hori hai,’ funny jokes are certainly not going anywhere! As you LOL at these viral memes, here we bring you some amusing 'Shweta is live,' vs ‘Pawri Hori Hai,’ funny jokes to help you decide better who made you laugh the most in the past days! It’s okay, if it’s a tie!

Before we begin, let us know both the origin of both the funny meme trends, for those who may not know the latest viral hashtags. “Pawri Hori Hai,” hilarious video took the internet by storm after Pakistani influencer Dananeer shared a clip saying—"Ye Hamari Car Hai, Yeh Hum Hai, Yeh Hamari Pawri Hori Hai.” It instantly went viral on the internet, giving birth to some of the most hilarious reactions on social media.

It's Harry and Ron keeping the #Pawri alive pic.twitter.com/lYjEa5GV7X

Only True Friends Fan Would Know How It's A 'Pawri'

When you spend a lot of money on your child's education but now he is saying "pawri" instead of "party"#pawri #PawriHoRahiHai pic.twitter.com/CJqP9kgtVT

Now, enters—Shweta, the girl who forgot to unmute her Zoom call. As the video of the hilarious zoom fail went viral, now everyone knows her love life, and also the guy she is possibly involved with. That’s not it! The world also knows the guy’s ‘sex-addict,’ girlfriend. The unsolicited call gave birth to a new meme trend with the viral hashtag #Shweta running on Twitter. This is surely one of the most epic zoom call fail, since the ‘new normal’ hit our life!

Reaction of boy after knowing that Shweta has disclosed his secret to everyone : pic.twitter.com/baJC58HqS5

People : Shweta your mic is on Shwetaa

But deep inside want to hear whole story : pic.twitter.com/P9iylz4nTI

Later: Shweta, Radhika with 111 others

Me checking every two minutes if my mic is turned off on zoom meetings to avoid being in a situation like Shweta's :#shweta pic.twitter.com/kTOzGzpFJI

Both the viral meme trends have their own charm and wit to make anyone laugh out loud. In the past days, ‘Pawri Hori Hai,’ funny memes were winning hearts, now it appears the trend may have got some competition. #Shweta jokes are pure gold! Whichever you prefer, one thing is certain, both the girl is going to rule the internet world with the hilarious meme trends in the coming days.

(The above story first appeared on LatestLY on Feb 18, 2021 04:34 PM IST. For more news and updates on politics, world, sports, entertainment and lifestyle, log on to our website latestly.com).