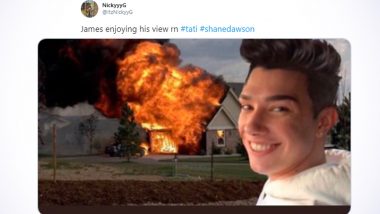 Tati Westbrook, Shane Dawson and Jeffree Star's drama is never-ending and this time it is different for James Charles, because he is the one grabbing the popcorn this time watching everything going down between the trio now that he is clear of all the accusations from last year. Right from Shane Dawson's YouTube channel getting demonetised to Tati making blasting revelations about how Star and Dawson "fed her poisonous lies" about James Charles, there so many angles to the whole drama filled with accusations and controversies that it is difficult to compile everything in one go. But allow us to spill some hot tea! The YouTube beauty world went upside down after Jeffree Star, the part-owner of Morphe Cosmetics apparently benefitted from the whole James Charles' and Tati Westbrooks' dirt that went down last year. Tati Westbrook Apology: From Shane Dawson's YouTube Getting Demonetised to Tati's 'BREAKING MY SILENCE' Video About Dawson and Jeffree Star Feeding Her 'Poisonous Lies' About James Charles, Drama in Beauty Community Gets Intense.

And that is not it, amid all this Star and Dawson's friendship and they released eyeshadow palette together (to be distributed by Morphe) and James Charles' palette was supposed to be released around the same time, Charles' dates were pushed further. But turns out, Star and Dawson did that on purpose. While YouTube is currently abuzz with Tati Westbrook's "BREAKING MY SILENCE ..." video claiming that YouTube majors Jeffree Star and Shane Dawson manipulated her into posting the video accusing Charles and allegedly spreading lies about her, so many funny memes and jokes have taken over various social media platforms. Check out the best ones:

When the smith When tati came

Coming for For him

WHY does shane dawson having a meltdown on Instagram live mirror rumplestiltskin being furious at shrek escaping LMAO pic.twitter.com/hmTdeWHnDo

Tatiana in her 30s

Shane Dawson in his 30s

Jeffree star in his 30s

Trisha in her 30s

My mum when I try and get my 5th day off from school that week:#shanedawson

YouTube has stopped allowing Shane Dawson to make money from ads on his three channels. Yes, his channel has been demonetised. Moreover, Target announced that it will no longer carry books written by the controversial vlogger. Last week with Jenna Marbles apologized for making racist jokes in the past and announcing that she was quitting her channel. Amid the Black Lives Matter protests, people are calling out influencers and famous content creators for mocking other communities. After YouTuber Jenna Marbles, Liza Koshy recently acknowledged and apologised for times when she had "unknowingly perpetuated racist ideas", in an apology note.

(The above story first appeared on LatestLY on Jul 02, 2020 04:09 PM IST. For more news and updates on politics, world, sports, entertainment and lifestyle, log on to our website latestly.com).