Tati Westbrook Apology: From Shane Dawson's YouTube Getting Demonetised to Tati's 'BREAKING MY SILENCE' Video About Dawson and Jeffree Star Feeding Her 'Poisonous Lies' About James Charles, Drama in Beauty Community Gets Intense 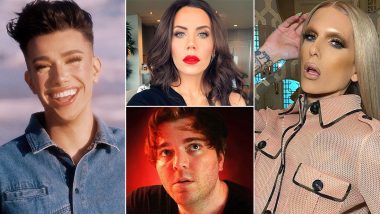 From Shane Dawson's YouTube Getting Demonetised to Tati Westbrook's "BREAKING MY SILENCE ..." Video, Here's What You Should Know of (Photo Credits: Instagram)

A lot is going down between Tati Westbrook, James Charles, Shane Dawson and Jeffree Star. Right from Shane Dawson's YouTube channel getting demonetised to Tati making blasting revelations about how Star and Dawson "fed her poisonous lies" about James Charles, a lot of drama, accusations and controversy is taking place in the YouTube beauty world. It is also being said that Jeffree Star is allegedly part-owner of Morphe Cosmetics and benefitted from James Charles' and Tati Westbrooks' issues that went down last year. Star and Dawson's friendship bloomed through a YouTube series and they also worked on releasing an eyeshadow palette together, which would be distributed by Morphe and since Morphe decided to also release James Charles' palette around the same time and while Charles' dates were pushed further, it is now being said that Star and Dawson dis that on purpose.

"It's now my opinion that Jeffree and Shane were both bitterly jealous of James Charles' success. Jeffree resented that so much of his business was centred around his biggest rival and Shane did not like that James Charles wanted to make a documentary," Westbrook said in what she believes to be true. She said it is her perception "that Jeffree and Shane needed James marginalized and out of the way for their November launch of the Conspiracy palette, along with Shane's merch."

Last year, in May 2019 if you remember, Westbrook released a 43-minute video accusing Charles of using his fame to "manipulate someone’s sexuality," referring to straight men. While Charles denied the claims coming from someone he considered like "his mother" this charge in a video of his own, the narrative stayed that Charles was promoting a competitor of Westbrook. However, now Tati Westbrook has "broken her silence" and released a video claiming that Star and Dawson "fed her poisonous lies" about James Charles.

Last year after YouTube beauty gurus Tati Westbrook and James Charles has a feud after Tati Beauty founder made a 43-minute making blasting accusation bout her former mentee titled, "BYE SISTER." However, now Westbrook returned to YouTube with a 40-minute video called "BREAKING MY SILENCE ..." claiming that YouTube majors Jeffree Star and Shane Dawson manipulated her into posting the video accusing Charles and allegedly spreading lies about her.

In the video, Westbrook publicly apologizes to Charles and claimed she never called him a "predator or danger to society." She further said, "I did not make my video because of vitamins," but "I made it as a result of all the poisonous lies fed to me by Shane Dawson and Jeffree Star. James, I am so sorry I allowed myself to be poisoned and weaponized against you." She also said, "Yes, I'm a grown woman. I'm smart. I can usually spot deceit and manipulation a mile away. But my guard was down from being heartbroken and I allowed my self to be worked by Shane, Jeffrey and others". Westbrook continued, "The moment that Jeffree went off on you the day before my first video collab with him went live, I should have run for the hills. I was naïve," Westbrook apologised saying, "Jackie I am sorry that I did not do the right thing and walk away from him then. I should have not been blind to the reasons behind the accusations of his racism." Watch video:

On Tuesday is was confirmed by YouTube that it has stopped allowing Shane Dawson to make money from ads on his three channels. Not just that a double blow awaits for Dawson as Target has also announced that it will no longer carry books written by the controversial vlogger. All this comes along with, YouTuber Tati Westbrook accusation video that calls out Dawson and fellow YouTuber Jeffree Star of manipulating her. Dawson, on Friday, posted a video titled “Taking Accountability" and in 20-minutes he apologizes for a career of offensive content, including wearing blackface, using racial slurs, insulting people living with disabilities, joking about pedophilia and speaking hypothetically about murdering a woman. "I should lose everything". "I have put so much hate on the Internet," said Dawson.

It all started after a spree of reckoning on YouTube, which began last week with Jenna Marbles apologizing for making racist jokes in the past and announcing that she was quitting her channel. Amid the Black Lives Matter protests, people are calling out influencers and famous content creators for mocking other communities. After YouTuber Jenna Marbles who quit YouTube "for now" apologising for past racist videos, Liza Koshy recently acknowledged and apologised for times when she had "unknowingly perpetuated racist ideas", in an apology note. The YouTuber specifically mentioned two old videos made by her where she mocked Asian accent while tasting candy from Japan and Hawaii. One of these clips also included her ex-boyfriend David Dobrik. She uploaded the video, titled, ‘I am sorry,’ on her YouTube channel.

(The above story first appeared on LatestLY on Jul 01, 2020 09:22 AM IST. For more news and updates on politics, world, sports, entertainment and lifestyle, log on to our website latestly.com).