A video of both driver and passenger sleeping in a moving Tesla car has been shared online. While it definitely looks comfortable for the riders, it is scary as viewers. The exact location from where this video is taken is not known but it has garnered mixed reactions. 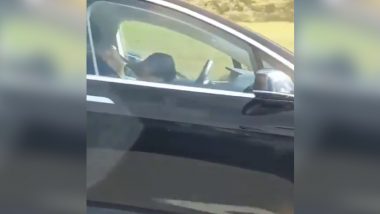 Tesla cars boast of an autopilot feature, which means the car can self-drive itself on the road. So a driver need not be as aware, as compared to high alertness while driving other cars. But a video of both driver and passenger sleeping in a moving Tesla car has been shared online. While it definitely looks comfortable for the riders, it is scary as viewers. The exact location from where this video is taken is not known but it has garnered mixed reactions. More so, with the company recently entering into the Indian market, some people wonder if this feature can be used in India and the possible outcomes. Last year, Tesla Autopilot driver crashed into deputy sheriff's car in North Carolina as he was busy watching a movie.

Tesla's autopilot feature is one of the most talked-about ones. The advanced driver-assistance system features offered by them have lane centering, traffic-aware cruise control, self-parking, automatic lane changes, semi-autonomous navigation on limited access freeways. It can also park on its own. But the driver is still responsible for the car. Now a 20-second video clip has been shared online on a Twitter account @knowIedgehub. The exact location from where this is taken is not known. It sees both the driver as well as the passenger in deep sleep as the car moves on the road. The video has sparked mixed reactions online, as people fear for other's safety in here too. Canadian Man Falls Asleep Behind the Wheel of His Tesla Car As Vehicle Breaks Speed Limit of 140kmph, Gets Booked Under ‘Dangerous Driving Charge’.

Driver and passenger both sleeping in Tesla 😬

The video has over a lakh views and close to 1000 retweets, but people sure have their concerns about the same. Check some reactions:

Honestly, I don’t like this progress at all. Sleeping while driving is questionable and irresponsible despite autopilot.

The old joke pops into mind: I want to die peacefully in my sleep, like my grandpa.

Not yelling and screaming, like the people in his car.

No thanks still dangerous.

Putting Others Lives at Risk

Apparently, Tesla does not let the drivers fall asleep in the upgraded models. The drivers need to touch the steering wheel or there's a beep at fixed interval. The current Autopilot features require active driver supervision and do not make the vehicle autonomous.

(The above story first appeared on LatestLY on Jan 16, 2021 08:39 PM IST. For more news and updates on politics, world, sports, entertainment and lifestyle, log on to our website latestly.com).