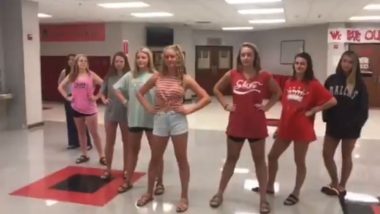 Will Skelton, the principal of Marcus High School in Flower Mound, Texas has apologised for a sexist dress code video that was shown to students during the second day of classes. The video discourages female students from sporting athletic shorts to the school. The clip that was widely shared widely on Twitter led to a social media outrage. The one-minute long video clip made on M.I.A.'s song 'Bad Girls' shows a group of teenage girls walking through the school's corridor in oversized T-shirts and shorts. The girls then cross paths with a school official who is visibly upset by their clothing and sent them to a classroom tagged as "dress code violators".

The video then shows the students being seated on a desk with a female teacher. The girls are then forcibly asked to read the phrase 'I will not wear athletic shorts' written on a whiteboard in front of them. Boys were not featured in the video neither was there any comment on them wearing shorts to school. Some seniors of the school took the matter to Twitter from where the video went viral and has over 90,000 views. Skirts Banned in 40 Secondary Schools in England to Support Gender Neutrality

Principal Skelton in his letter to parents wrote that the song included in the video was "a poor song choice". He wrote, "I am a firm believer that when you make a mistake, you own it, you apologize, and you make it right." Twitter users outside the school also joined the conversation in raising voice against the school's sexist views. Meerut University Bans Scarves for Girls to Avoid Trespassing & Barres Students from Wearing 'Revealing' Clothes

Today my school was shown this video. So sad how ONLY girls are shown as the violators. I understand why my school has a dresscode, but what about the boys who wear shorts, or show their shoulders? It’s 2018...Why are we still over-sexualizing teen girls? pic.twitter.com/fCXymYAIEG

Series of tweets by a senior student on the incident:

I have so much respect for @Marcus_HS principal Mr. Skelton. Today he had an important conversation with me about the issues in the video, and was fully understanding of where the offended female student body was coming from.

Skelton in the letter added, "Yesterday we showed a dress code video that featured only female dress code violations, and was accompanied by a poor song choice. Construction in and around the campus prevented us from holding student orientation, which is typically accompanied by a fashion show that demonstrates what to wear, and what not to wear. We believed a video would be a good way to replace the fashion show, but this video absolutely missed the mark. Please accept my sincere apology for not ensuring our video achieved its intended purpose - to remind ALL students of our dress code expectations."

(The above story first appeared on LatestLY on Aug 21, 2018 11:04 AM IST. For more news and updates on politics, world, sports, entertainment and lifestyle, log on to our website latestly.com).