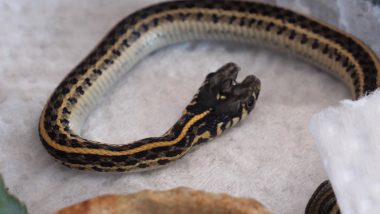 July 16 marks the celebration of World Snake Day, a day that focuses on creating awareness about this serpent species that exist in the world. There are so many varieties of snakes in the world some of them too rare. Among the rare ones are some that are born with body defects like multiple-headed snakes. One of the snake breeding owners saw the birth of such a snake recently. YouTubers of Snake Discovery channel who own a garter snake recently witnessed the hatching of a two-headed snake among a litter of 13 snakes. They have posted a detailed video about their new snake litter and the rare little serpent on their channel. World Snake Day 2020: From Serpent Crawling on ATM Machine to King Cobra Drinking Water From Bottle, Watch Viral Videos of Snakes That Ssscared The Netizens.

Emily Roberts and her husband Ed post informative videos about snakes, their birth, growth, facts etc. In their recent video, they posted about the birth of a two-headed snake born to their garter snake. They held the baby snake in hand and showed the snake shedding skin. All other snake babies hid in their tank almost immediately after they hatched. The two-headed snake is joined near the eyes and has one jaw. Emily mentions that this is the first time they have experienced the birth of a two-headed serpent. They also showed the other babies that they separated in a container. They made a separate bowl home for the two-headed one. What Causes Multiple Heads to Grow? Everything About Polycephaly (Watch Video).

It is not very rare although for spotting of two-headed snakes. Similar sightings have been captured in different places in India as well as around the world. Such snakes find it difficult to survive because each head tries to control the body. It is a medical condition called Polycephaly, a common condition of having more than one head, usually found in animals.

(The above story first appeared on LatestLY on Jul 16, 2020 03:18 PM IST. For more news and updates on politics, world, sports, entertainment and lifestyle, log on to our website latestly.com).