'Rare' Two-Headed Wolf Snake Spotted in Odisha But It's Not The Only One! View Pics and Videos of Serpents With Two Heads From Around The World

The serpent was found in the Dhenkikot forest range of Keonjhar wildlife sanctuary in Odisha State. It had exactly two fully formed heads, four eyes and two tongues. But this is not the first time such a snake has been captured on video. We bring you a list of other instances when two-headed serpent sightings made it to the headlines. 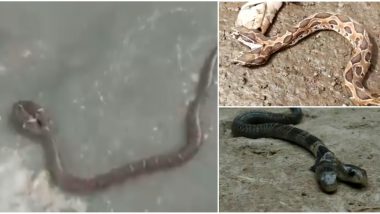 An extremely rare two-headed wolf snake was captured by a photographer in Odisha. The serpent was found in the Dhenkikot forest range of Keonjhar wildlife sanctuary in Odisha State. It had exactly two fully formed heads, four eyes and two tongues. In such cases, both the heads function independently and thus it becomes difficult for their survival. This rare wolf snake was captured by wildlife enthusiast Rakesh Mohalick. Pictures and video of the two-headed snake have come up online. But this is not the first time such a snake has been captured on video. We bring you a list of other instances when two-headed serpent sightings made it to the headlines. Albino Cobra Hatchling Rescued in Bengaluru, In a First A Two-Day Old Rare Snake Was Found.

Rakesh Mohalick is a photographer and does research on various species. He identified this snake as a wolf snake, which is a non-venomous species. He also informed that because of the two heads, the snake ends up competing with itself. He was quoted in a report to Daily Mail, "One among the two heads is slightly more developed and both are known to fight over food." Video of the snake has been shared on Twitter by IFS Susanta Nanda, who also informed that the snake was released in the forest. Karnataka: Two Men Try to Sell Valuable Two-Headed Snake Disguised As Delivery Boys for an Online Service in Bengaluru, Arrested.

A rare wolf snake with two fully formed heads was rescued from a house in the Dehnkikote Forrest range of Keonjhar district in Odisha.

The phenomenon of two-headed bodies is called as Polycephaly and although it is rare, there have been cases of such findings in snake even before. In September, a two-headed viper snake was caught in Kalyan, a little off Mumbai in Maharashtra.

At other time, a two-headed snake was found in the Ekarukhi village of Belda forest range in  West Bengal, in December 2019. It belonged to Naja Kaouthia species. Residents were seen offering it milk.

Check Pics of the Two-Headed Snake from West Bengal:

Similar findings have been reported from other countries too. In Kentucky home, a couple found a two-headed copper snake in their yard two years ago. The couple donated the "extremely rare" snake to the Salato Wildlife Education Center.

Check Pics of the Two-Headed Copper Snake From Kentucky:

A Chinese farmer had also encountered a two-headed snake that broke into his yard in Shenzhou, N China's Hebei. The snake escaped later but a video of this rare serpent was captured.

A two-headed snake broke into a farmer's yard in Shenzhou, N China's Hebei, and escaped later. Have you ever seen any "fantastic beasts" in your life? pic.twitter.com/YKzU0IUdji

So these are some of the examples of such sightings of two-headed snakes that have been reported from different places from around the world. So yes, it is rare but it is not so uncommon to come across such snakes. The survival of such snakes is usually difficult because their two heads contrast with each other's functioning.

(The above story first appeared on LatestLY on May 08, 2020 01:39 PM IST. For more news and updates on politics, world, sports, entertainment and lifestyle, log on to our website latestly.com).