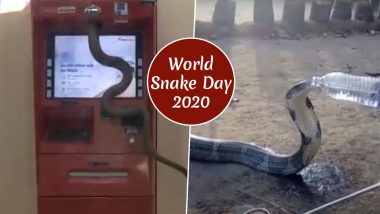 World Snake Day is observed on July 16 annually to celebrate the wide variety of species around the world. The day creates awareness about saving the reptiles and their habitat. There are around 3,500 species of snakes in the wild with about 600 of them being venomous. According to the World Health Organisation, there are only about 200 species of them that pose a significant risk to human. The day portrays the importance of snakes in the wild and why it is important to protect their habitat. As we observe World Snake Day 2020, we bring to you a list of snake videos that went viral in the past. World Snake Day 2020 Date, History and Significance: Know About the Day That Spreads Awareness About Different Snake Species Around the World.

Some of the videos that shocked the internet include the clip of a King Cobra drinking water from a bottle poured out by a man. It seemed like it was the first time netizens same anything like that. Another scary video of snakes was when a long reptile was seen gliding inside an ATM in Dehradun. It could be seen crawling on the floor and also on the screen on the machine. On World Snake Day 2020, here are some viral snake videos to watch. Snakes Come Out in The Rains: Here's What You Should Do If You Spot Serpents in Your Area This Monsoon.

This video of a King Cobra drinking water from a plastic bottle had gone viral widely on social media platforms. The clip is from Karnataka and it was said that as the summer heat increased snakes had come out in search of a drink. While some said that it was mating season and the reptiles often come out during this time.

#WATCH: A 15-feet-long King Cobra was rescued from Narasipuram village in Coimbatore by Forest Department. It was later released into Siruvani forest area. #TamilNadu (11/7) pic.twitter.com/abYKcNuRoQ

Recently, a 15-feet-long King Cobra was rescued from Narasipuram village in Coimbatore by Forest Department in Tamil Nadu. It was later released into Siruvani forest area. The video showed the long snake being taken from a muddy area and put into a bag.

King Cobra Given a Bath:

Snake Inside ATM Machine in Dehradun:

Hi @ICICIBank looks like your Tughlakabad ATM welcomed a special guest yesterday! Friend says domestic help was there when this visitor was spotted trying to withdraw some cash!! #KundliMaarKei quite literally 😳 @ParveenKaswan pic.twitter.com/QPMa9uFfrO

Video of a huge snake inside an ATM in Govindapuram, Ghaziabad had gone viral shocking people. The clip shows the snake crawling on the screen of the ATM machine which is located near Dehradun Public School.

Cobra Snake Stuck Inside Beer Can in Odisha:

Video of a Cobra snake being stuck inside a beer can in forest range of Baripada, Mayurbhanj in Odisha has gone viral on social media platforms. It seems the snake was in search of food and ended up inside the can. It was rescued from the can and later released into the wild by locals.

Videos of snakes often go viral on social media platforms every now and then. They seem to be coming out of the wild because they don't enough food inside. Also, as their habitat is under attack they venture into human settlement. On World Snakes Day, let's pledge to help take necessary steps that will keep the species going.

(The above story first appeared on LatestLY on Jul 15, 2020 02:07 PM IST. For more news and updates on politics, world, sports, entertainment and lifestyle, log on to our website latestly.com).