Would You Stay in a Potato? Giant Idaho Potato Converted into Airbnb Rental (See Lovely Pics) 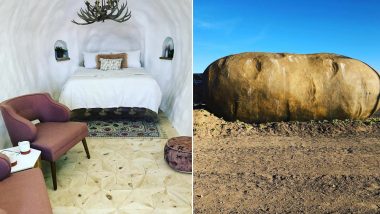 While Airbnb is known for giving their 'out of the box' homestay ideas, nobody thought a potato could fit in. Recently, they converted a six-ton potato prop that has been travelling across the US for six years into an Airbnb Rental. It is not a real potato (obviously) but made to look like one. This giant potato currently sits in South Boise promoting the state's crop. The room costs $200 (Rs 14000) a night for two people.

This movable potato house is 28-foot long, 12-foot wide, and 11.5-foot tall and weighs 6000kg. Created by Idaho Potato Commission to promote the vegetable, the potato was initially supposed to spend only two years on the road, but it is currently in its sixth year. After the tour was done, the Idaho Potato Commission was in loss when a tiny house developer, Kristie Wolfe, approached them. and suggested converting it into a rental home. UK's First Upside-Down House in Bournemouth Has Opened Its Doors to Public, See Pics.

The Idaho Potato Commission agreed and gave her the liberty to go what she wished. And she converted it into a one-bedroom house opening unto the scenic beauty of Owyhee Mountains on one side. The houses consist of a queen-sized bed, a fireplace, air conditioning and a bathroom with a walk-in shower, sink and toilet. With white walls and bed, beautiful vases, pink chairs, potted plants, the room looks Instagram perfect.

Check of pictures of Famous Idaho Potato turned into an Airbnb house:

Frank Muir, the Idaho Potato Commission president and CEO was quoted as saying, "If you really just wanted to know what it’s like to be inside a potato as opposed to having a potato inside you, here’s a great opportunity to experience it." The room doesn't have TV, but you can spend time admiring the hills and they promise potato-based snacks!

(The above story first appeared on LatestLY on Apr 24, 2019 12:26 PM IST. For more news and updates on politics, world, sports, entertainment and lifestyle, log on to our website latestly.com).