Against All Odds, Shivani Soam, A Labourer's Daughter, Dreams of Winning an Olympic Medal in Long Jump

Coming from a small village in Uttar Pradesh and setting a record in long jump for Delhi, the story of Shivani Soam has drama, emotion and the determination to overcome all odds, including the barriers erected by the male chauvinistic society. 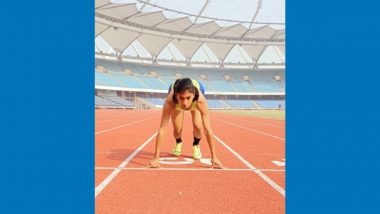 New Delhi, May 9: Coming from a small village in Uttar Pradesh and setting a record in long jump for Delhi, the story of Shivani Soam has drama, emotion and the determination to overcome all odds, including the barriers erected by the male chauvinistic society. Hailing from a village in Moradabad district, choosing sports was not easy for Shivani. From getting flak for wearing shorts to practicing with boys, life wasn't easy for Shivani in her village. IBA Women's WBC 2022: Lovlina Borgohain to Begin Campaign on Opening Day.

But her dedication and determination to do something in sports saw Shivani go ahead despite the taunts. The society, which used to berate her and her family, is today lauding her achievements. The mind-set of the people has changed after Shivani won silver in the 30th North Zone Junior Athletics championship, organised by the Haryana Athletics Association at Rohtak in October 2018. "All this was not easy for me. My parents used to work in Delhi as daily-wage labourers. At the time of the first Covid-19 wave, the financial situation went from bad to worse for us. We had to return to our village from Delhi. There, when I used to go for practice in the morning, I was the target of taunts. Still, I continued my training," Shivani told IANS.

Taunts were not the only problem Shivani faced. During the lockdown, when her parents had no work, a situation arose when she even though of leaving the sport. However, she continued her passion against all odds. Shivani concedes that the pandemic period in 2020 was like an 'earthquake' situation in her life. "The lockdown affected us badly. We had to return to our village... we faced a different problem here. There are many problems for girls, but I did not give up and continued my practice. After a few months, when things became normal, we came back to Delhi, where Deepika ma'am (a sports management company head) contacted me. Since then I have not faced any problem. Now I am focusing on my game," said the 20-year-old, who wants to breach the Asian Games qualifying mark. Uber Cup Finals 2022: PV Sindhu-Led India Outplay Canada 4–1 in Opening Group Match.

Shivani won gold in the Delhi State Athletic Championship in August, 2019, with a record jump of 5.31 metre. The record is still in Shivani's name. She says that she is putting in a lot of effort to breach the Asian Games qualifying mark of 6.45 metre. "I made this record (Delhi State) in 2019. Since then, my performance has improved a lot, now I can easily cross 6.50 in training. It is not difficult for me to qualify for the Asian Games." Shivani has a dream of winning an Olympic medal. While the athlete is aware that the task is not easy, she is confident that one day she will be good to compete at the international level.

"For a player, the biggest dream is an Olympic medal. I have a dream of winning a medal at the Olympics. But before that, there will be an attempt to win a medal at the Asian Games. My jump is good now, and with a little improvement, I will qualify for the Asian Games. After that I will plan for the future," Shivani told IANS. Shivani thanked the sports management company ENGN and its head Deepika Das Pereira, and said that they have helped her a lot by paying for training.

"Shivani is a very talented girl. ENGN focuses exclusively on female athletes and helps them realise their potential and reach their goals. In its endeavour to encourage all women to make health and fitness a part of their life, it has also launched a product line of high quality performance wear at affordable prices. Part of the revenue is cycled back towards supporting the needs of their talent," Pereira, head of talent and sports, ENGN, said.

(The above story first appeared on LatestLY on May 09, 2022 01:39 PM IST. For more news and updates on politics, world, sports, entertainment and lifestyle, log on to our website latestly.com).