BWF World Championships 2019 Results: HS Prannoy and Sai Praneeth Advance to Third Round of the Badminton Tournament in Switzerland 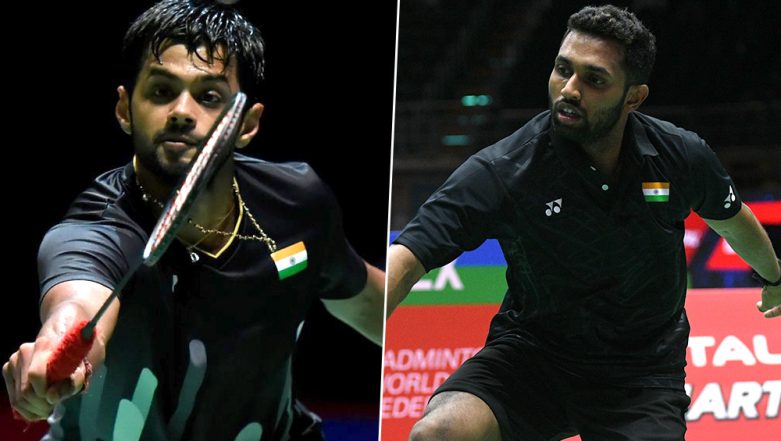 Basel, August 20:  H.S. Prannoy stunned five-time world champion China's Lin Dan to advance to the third round of the BWF World Championships here on Tuesday, and following his footsteps, B. Sai Praneeth also defeated ace Korean shuttler Lee Dong Keun in the second round to advance to the next stage. Praneeth defeated Lee in straight games 21-16, 21-15 in a match which lasted for 56 minutes. The Indian showed his skill in the first game with his quality strokes and took a 21-16 lead in the opening game. The second game saw some errors from Praneeth but he made a strong comeback to win the second game 21-15. BWF World Championships 2019: HS Prannoy Stuns Five-Time Champion Lin Dan to Enter Third Round of the Badminton Tournament.

Earlier, world No 30 Prannoy, who is on a comeback trail after recovering from a stomach problem, on Tuesday registered one of his biggest upsets in recent times as he beat Lin. Prannoy, who has a reputation of producing big upsets when on song, defeated 11th seeded Lin 21-11, 13-21, 21-7 in a match that lasted for 62 minutes. The World No 30 didn't break much sweat in the first game and won it rather easily. The Chinese legend came back strongly in the second game and showed his true class. He didn't allow Prannoy to take any advantage and won the game 21-13. HS Prannoy Slams Selection Committee for Arjuna Awards, Says 'Performance is Least Considered in Our Country'.

However, in the decider, Prannoy took the lead from the very beginning and made sure he didn't let the opportunity slip of upsetting the five-time champion. At interval of the third game, Prannoy had a six-point lead which he extended to 21-7 to seal the match and progress through to the next round. Prannoy had earlier defeated Lin at the 2018 Indonesia Open and the 2015 French Open and now leads the head-to-head race at 3-2.

In the first round, Prannoy had come from behind to beat 93rd-ranked Eetu Heino of Finland 17-21, 21-10, 21-11 and set up the clash against Dan. Meanwhile, the men's doubles pair of Manu Attri and Sumeeth Reddy defeated French duo Thom Gicquel and Ronan Labar 21-13, 21-13 in a first round tie. In the women's doubles, Ashwini Ponappa and N. Sikki Reddy got a walkover from Chinese Taipei's Chang Ching Hui and Yang Ching Tun in their opening match and will now take on Chinese pair of Du Yue and LI Yin Hui in the second round.