Afghanistan would be on a high after beating Scotland comprehensively and so would be Pakistan, who have won all two games so far. Who would come out on top when these two sides clash in an intense match in Dubai? Stay tuned to find out! 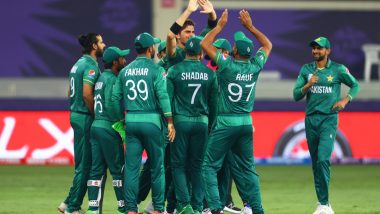 After an impressive win over Scotland, Afghanistan would take on Pakistan in the T20 World Cup 2021 on Friday, October 29. The match would be played at the Dubai International Stadium and would begin at 7:30 pm IST (Indian Standard Time). It was truly a memorable win for the Afghans earlier this week in a Group 2 clash vs Scotland. Statistically, it was their best ever with the margin being 130 runs--which sky-rocketed their net run rate to a huge 6.500 but also, the way they dominated the match from the start was something to watch and applaud. But that is a thing of the past as now they would be up against a tougher challenge against Pakistan, who have seemed unstoppable in this competition so far. AFG vs PAK Dream11 Team Prediction: Tips To Pick Best Fantasy Playing XI for Afghanistan vs Pakistan, Super 12 Match of ICC T20 World Cup 2021

Two successive wins--against India and New Zealand have definitely put them right in the drivers' seat to qualify for the semifinals and Babar Azam and his side would almost ensure their spot in the last four if they beat Afghanistan. Afghanistan also would have a chance at not just going to the top of the Group 2 points if they win, but also solidify their hopes of a semifinal berth.

Pakistan won the only match that these sides played against each other. So they would have a slight edge but that would not make much of a difference on the given day.

Shaheen Shah Afridi and skipper Babar Azam would be the most crucial players for Pakistan with both being in good touch while for Afghanistan, skipper Mohammad Nabi and Rashid Khan can turn out to play very important roles in this game. A mention has to be made of the ever-dependable Rashid Khan, who can turn the game any time with leg-spin and also handy contributions with the bat. ICC T20 World Cup 2021 Points Table

The contest between Shaheen Afridi and Mohammad Shahzad would be a good one as it would be interesting to see if the latter can take on the left-arm bowler or be dominated by him. Also, the duel between Babar Azam and Rashid Khan is going to be a very important one in this game.

The AFG vs PAK clash will be played at the Dubai International Stadium on October 29, 2021 (Friday). The AFG vs PAK encounter has a start time of 07:30 pm IST (Indian Standard Time) with toss taking place at 07:00 pm.

Fans can live telecast the Afghanistan vs Pakistan match live on Star Sports channels. The AFG vs PAK match in T20 World Cup 2121 live telecast will be available on Star Sports channels in English and well as regional commentary languages. Fans looking for how to watch the AFG vs PAK live streaming online can watch the match live on the Disney+Hotstar app as well as on the website. Fans watching the live streaming online on Disney+ Hotstar will have to pay a nominal fee and subscribe to catch the live-action.

(The above story first appeared on LatestLY on Oct 28, 2021 05:17 PM IST. For more news and updates on politics, world, sports, entertainment and lifestyle, log on to our website latestly.com).