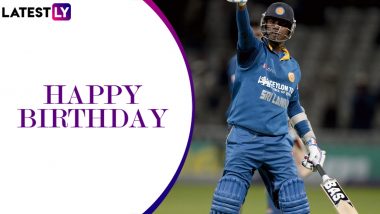 Sri Lanka all-rounder Angelo Mathews celebrates his 33rd birthday on Tuesday (June 2, 2020). The star cricketer is a dependable batsman in the middle order along with being a handy medium pacer. The talented lad has proved his mettle in all the formats of the game and is a vital cog in the Sri Lankan team. Courtesy his rock-solid defence and ability to accumulate quick runs at will, Mathews boasts off a brilliant in both Test and ODIs. Also, his knack of taking crucial wickets has proved to be match-defining many times. As Mathews turns a year older, we'll revisit some of his best performances. Sri Lanka Cricketers to Resume Training from Monday.

Making his international debut in October 2008, Mathews didn't take long in cementing his place in the side. Known for his hitting prowess earlier in his career, Mathews evolved as a solid middle-order batsman. Courtesy his consistent performances, he was also given the reins of the team in 2013. However, he stepped down from the job following Sri Lanka's miserable performances post-retirement of players like Kumar Sangakkara and Mahela Jayawardene. Nevertheless, he still continues to be an important part of the team as a player. Meanwhile, let's look at some of his best performances.

Sri Lanka piled up a massive score of 307/6 in the third match of 2009 Compaq Cup and the track looked idol for batting. However, that wasn't the case when the Men in Blue came out to chase the target. Mathews delivery a sensational spell ran through the potent Indian batting line-up. The likes of Rahul Dravid and MS Dhoni also looked in front of the bowler as Mathews scalped his maiden five-wicket haul in ODIs and guide the home team to a 139-run triumph.

Mathews was certainly at the peak of his prowess during the 2nd Test of Sri Lanka's 2014 Tour of England. After the visitors got bundled out for 257 runs while batting first, the Lankan skipper bowled a terrific spell and took four crucial wickets. However, that wasn't his best performance in the game. He put up a sensational batting performance in the third innings and brought up a brilliant hundred. His all-round efforts proved to be fruitful as Sri Lanka won the game by 100 runs.

Despite ending up on the losing side, Mathews received the Man of the Match award in the fifth ODI of Sri Lanka's 2014 Tour of India courtesy his incredible performance. Coming to bat at number five in the first innings, the skipper produced a jaw-dropping batting display. Mathews brilliantly batted with tail and brought up his maiden ODI ton. In the second innings, the all-rounder dismissed both the Indian openers cheaply. However, his counterpart Virat Kohli played a fantastic knock and helped India win the game by three wickets.

200 Vs Zimbabwe in Harare

Another Angelo Mathews special came during the 1st Test of Sri Lanka's 2020 Tour of Zimbabwe. Dimuth Karunaratne and Co were under the pump after the home side posted 357 runs in the first innings. However, Mathews showcased an exhibition of high-class batting and played a stellar knock. He tormented the Zimbabwe bowlers for more than a day and brought up his maiden double century in Test matches. Riding on his efforts, the visitors won the game by 10 wickets.

The ongoing year might be very crucial for Mathews if the ICC T20 World Cup 2020 takes per schedule. However, many reports suggest that the gala tournament is likely to get postponed to 2022 due to the COVID-19 crisis. Nevertheless, the Sri Lankan cricket team has resumed training following the relaxations in lockdown and will aim to turn their fortunes in international cricket.

(The above story first appeared on LatestLY on Jun 02, 2020 08:00 AM IST. For more news and updates on politics, world, sports, entertainment and lifestyle, log on to our website latestly.com).