After doing quite well in a various domestic tournament, Arjun Tendulkar continued to do well in the opening game of the Mumbai T20 League which commenced from today. 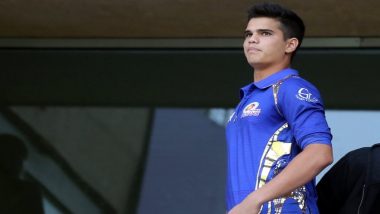 The Triumph Knights Mumbai North East did not get a dream start as the openers Karan Shah and Shikhar Thakur made way to the pavilion on the score of 14 and 7. However, it was Suryakumar Yadav who scored the maximum runs for the team. The Mumbai Indians player made 90 runs from 56 balls. Aakash Tigers Mumbai Western Suburb restricted the team to a total of 147 runs.

Kaustubh Pawar and Aakarshit Gomel were the ones to give a flying start scoring 34 and 41 runs respectively. Arjun Tendulkar scored 23 runs from 19 balls. No other batsman from the team could touch a total of 20 runs. But with a little contribution from rest of the team members helped the Aakash Tigers Mumbai Western Suburb achieve the target with three balls to spare.

(The above story first appeared on LatestLY on May 14, 2019 10:59 PM IST. For more news and updates on politics, world, sports, entertainment and lifestyle, log on to our website latestly.com).