Babar Azam, Azhar Ali and Other Pakistan Cricketers Hit the Gym Hard Ahead of Test Series Against England (Watch Video) 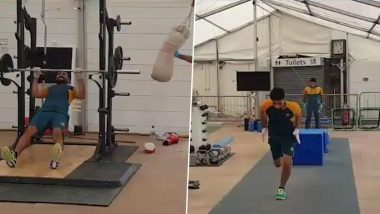 Pakistan players have almost a month to prepare for the Test and T20I series against England. However, the players are not being complacent by the fact and they are leaving no stones unturned while hitting the gym. The official Twitter account of Pakistan Cricket Board (PCB) shared a video in which Azhar Ali and Co can be seen practising hard at a gym in Worcester. In the clip, the likes of Babar Azam, Azhar Ali, Sarfaraz Ahmed and other Pakistan stars can be seen undergoing different fitness drills in order to be in proper shape ahead of the Test series. Six Pakistan Players Including Mohammad Hafeez and Wahab Riaz Return Negative for COVID-19.

Before Pakistan, West Indies will lock horns with England in a three-match Test series, starting from July 8. However, in order to adapt to the new conditions amid the COVID-19 virus, the players and team management have arrived early. Meanwhile, let’s look at the video shared by PCB.

Well, Pakistan Cricket Team’s way to United Kingdome was certainly not smooth. Initially, a squad of 29 members was announced by the Pakistan Cricket Board, who will tour England. However, 10 players of that team were tested positive for COVID-19 virus. Further, in the second round of Test, six players were tested negative.

As of now, a fixed schedule of Pakistan’s fixture against England hasn’t come out. However, the series is most likely to get underway at the end of July. It will also be Pakistan’s first international assignment after COVID-19 break and it will be interesting to see how they’ll perform against a strong England team.

(The above story first appeared on LatestLY on Jul 03, 2020 07:44 PM IST. For more news and updates on politics, world, sports, entertainment and lifestyle, log on to our website latestly.com).