The ban includes Majumdar not getting press accreditation for domestic or international matches in India, no interviews with any "registered players" and no access to cricket facilities owned by the BCCI or the state/member associations, for the two years. In response to Saha's tweet, the Kolkata-based journalist said the screenshot put out by the wicketkeeper was a doctored version of an exchange between the two. 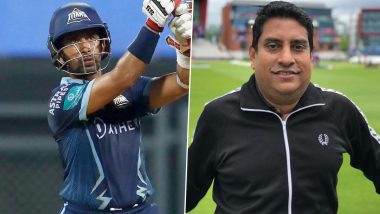 Mumbai, May 4: The Board of Control for Cricket in India (BCCI) has banned journalist Boria Majumdar for two years for "threatening and intimidating" India wicketkeeper-batsman Wriddhiman Saha. The ban includes Majumdar not getting press accreditation for domestic or international matches in India, no interviews with any "registered players" and no access to cricket facilities owned by the BCCI or the state/member associations, for the two years. Fans React After BCCI Bans Journalist Boria Majumdar For Two Years For Intimidating Wriddhiman Saha

In a letter sent to its members on Tuesday, the BCCI said that a three-member committee comprising vice-president Rajeev Shukla, treasurer Arun Dhumal and councillor Prabhtej Singh Bhatia had spoken to both Saha and Majumdar and concluded that Majumdar's actions "were indeed in the nature of threat and intimidation".They recommended the sanctions to the BCCI's Apex Council, which agreed and imposed the ban.

"The Apex Council of BCCI agreed with the recommendations of the BCCI Committee and imposed the following sanctions: i. 2 (two) year ban on getting any accreditation as a member of the press in any of the cricket matches (domestic and international) in India; ii. 2 (two) year ban on getting any interview with any registered players in India; and iii. 2 (two) year ban on access to any of BCCI and members associations owned cricket facilities," it added. The development comes on the heels of the 37-year-old wicketkeeper posting a tweet on February 19 that captured a screenshot of the messages that a journalist had sent him on WhatsApp.

"After all of my contributions to Indian cricket..this is what I face from a so-called "Respected" journalist! This is where the journalism has gone," the screenshot showed. The messages eventually took a more aggressive tone: "You did not call. Never again will I interview you. I don't take insults kindly. And I will remember this. This wasn't something ypu [sic] should have done."

Though Saha hadn't named the journalist in question, Majumdar responded on March 5, saying he would serve a legal notice to Saha for defamation. The Kolkata-based journalist, in a video posted on social media, said the screenshot Saha had put out was a doctored version of an exchange between the two.

The BCCI, as it says in the message to the member associations, "had taken cognizance of this incident and deemed it necessary to investigate and probe the matter to avoid the recurrence of such instances with other players", and formed the three-member committee. The committee subsequently "considered the submissions" of Saha and Majumdar before arriving at their decision. Saha is currently representing Hardik Pandya-led Gujarat Titans in the IPL 2022 as an opening batter, scoring 154 runs in 5 matches.

(The above story first appeared on LatestLY on May 04, 2022 06:10 PM IST. For more news and updates on politics, world, sports, entertainment and lifestyle, log on to our website latestly.com).