Boria Majumdar, as per reports, has been found guilty by a three-member BCCI committee of intimidating Indian wicket-keeper over an interview request. The ban means, Majumdar will not be allowed to enter stadiums in India. 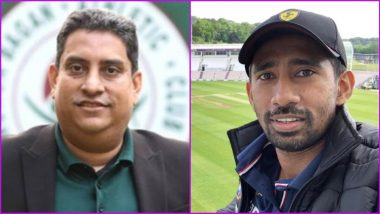 The Board of Control for Cricket in India (BCCI) is reportedly going to impose a two-year-ban on sports journalist Boria Majumdar in Wriddhiman Saha case. Majumdar has been found guilty by a three-member BCCI committee of intimidating Indian wicket-keeper over an interview request, as per a report in the Indian Express. The ban means, Majumdar will not be allowed to enter stadiums in India. The BCCI is also expected to write to the ICC to blacklist the journalist. Amul Shares Interesting Topical on Controversy Surrounding Wriddhiman Saha Receiving Threat From Journalist (Check Post).

“We will be informing all state units of the Indian cricket board to not allow him inside stadiums. He won’t be given media accreditation for home matches and we will also be writing to ICC to blacklist him. Players will be asked not to engage with him,” a top BCCI official told The Sunday Express on condition of anonymity.

Earlier in February this year, Saha took to Twitter and highlighted how a ‘respected’ journalist’ threatened him while sharing screenshot. One of the messages read, “You did not call. Never again will I interview you. I don’t take insults kindly. And I will remember this.” While sharing it on Twitter, Saha wrote, “after all of my contributions to Indian cricket… this is what I face from a so-called ‘Respected’ journalist! This is where journalism has gone.”

After all of my contributions to Indian cricket..this is what I face from a so called “Respected” journalist! This is where the journalism has gone. pic.twitter.com/woVyq1sOZX

After Saha received support from the fans and Indian cricket fraternity, BCCI formed a committee comprising vice-president Rajeev Shukla, treasurer Arun Dhumal and apex council member Prabhtej Bhatia to look into the allegation made by the wicket-keeper. Saha then identified the journalist as Majumdar before the committee and further alleged how he was “bullied” for an interview. After Majumdar’s name popped up, he accused the cricketer of “doctoring” the screenshots of the WhatsApp messages he had posted on Twitter.

(The above story first appeared on LatestLY on Apr 24, 2022 11:43 AM IST. For more news and updates on politics, world, sports, entertainment and lifestyle, log on to our website latestly.com).