The associate nations, hit hard by lack of game time due to COVID-19, did fairly well. Oman showed promise, Papua New Guinea could have shown more if they had game time under their belt. Namibia and Scotland were brighter going to Super 12 stage of Men's T20 World Cup. Ireland and Netherlands flattered to deceive though the former won an ODI against South Africa. 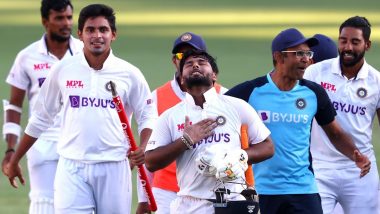 New Delhi, December 31: Life, very much like cricket, gives human beings moments which they cherish and remember for a lifetime. After 2020 was heavily dominated by COVID-19 and bio-bubble with some bits of cricketing action, 2021 was a better upgrade in terms of the on-field play, giving followers of the game many edge-of-the-seat thrilling moments.

India began 2021 in a very spectacular fashion, drawing the Sydney Test, thanks to a resilient 256-ball 62-run partnership between Hanuma Vihari and Ravichandran Ashwin while battling a torn hamstring and sore back respectively. On day five, when Ashwin and Vihari hanged around to save India, Australia captain Tim Paine tried to sledge Ashwin with 'Can't wait to get you to the Gabba' dialogue.

In the series decider at Brisbane, Paine's dialogue backfired gorgeously as Shubman Gill, Cheteshwar Pujara and Rishabh Pant helped India win the match and win the Border-Gavaskar Trophy 2-1. The Indian team, missing many of its first-choice players, breached the Gabba fortress, making it Australia's first loss at the venue since 1988. Year Ender 2021: From Change in Rules to Addition of New Races, Formula 1’s Review As We Move Into 2022.

After this, India unearthed a gem in Axar Patel, who played a big role in the hosts winning the four-match series 3-1 against England. While India did well in the rest of the year in terms of bilateral series, the same success wasn't seen in ICC events.

In the inaugural World Test Championship final in Southampton, India was troubled by old nemesis Kyle Jamieson in both innings with Ross Taylor and Kane Williamson applying finishing touches to the chase.

For New Zealand, apart from winning the WTC, they maintained a 100 per cent record in ODIs and reached the final of Men's T20 World Cup. Their left-arm spinner Ajaz Patel achieved a rare feat, of taking all 10 wickets in an innings of Test cricket against India at Mumbai, his place of birth. Players like Rachin Ravindra, Devon Conway and Daryl Mitchell turned out to play vital roles for the Blackcaps.

Australia, who began the year on a shaky note, ended the year strongly with its first Men's T20 World Cup and retained the Ashes in a thumping fashion at home. Mitchell Marsh and David Warner scripted stunning stories of doing well when it mattered the most after being written off by numerous people. England oscillated between great and woeful in going from white-ball cricket to red-ball cricket though Joe Root became a Test run machine.

Pakistan had a good time in T20Is in 2021, especially when the Men's T20 World Cup was on. Beating India by 10 wickets was a great highlight but its dominating run was brought to a halt by Australia in the semifinals. Sri Lanka's young guns showed promise for the future but what happens next is anyone's guess.

West Indies began the year with a Test series win, thanks to Kyle Mayers and Nkumrah Bonner's gigantic partnership in Bangladesh but the defending champions in Men's T20 World Cup came a cropper.

The associate nations, hit hard by lack of game time due to COVID-19, did fairly well. Oman showed promise, Papua New Guinea could have shown more if they had game time under their belt. Namibia and Scotland were brighter going to Super 12 stage of Men's T20 World Cup. Ireland and Netherlands flattered to deceive though the former won an ODI against South Africa.

Women's cricket had the best and rough times in 2021. The introduction of women's Hundred did a lot of good for the game apart from the Women's Big Bash League reaching greater heights in terms of viewership in the final. Both competitions had Indian cricketers showing their skills but the South Africans played a decisive hand in the knockouts.

Australia's 26-match winning streak in ODIs was snapped by India acing their most successful chase in the format, just 48 hours after losing a thrilling match. India, after no-show for almost 14 months, played against South Africa, Australia and England, including a red-ball and pink-ball Test each. The year for women's cricket ended with a Thailand heart-break in the Women's Cricket World Cup qualifiers despite being in pole position to enter the ICC Championships' table.

2022 holds a chance for cricket enthusiasts to have a bag full of memories despite the Omicron variant of COVID-19 threatening to shut the world, again. The Men's U19 World Cup in the West Indies will unearth more stars of the future. A few weeks later, the Women's Cricket World Cup in New Zealand will see the best of women cricketers set the world on fire. Then in October and November, Australia will begin its title defence of Men's T20 World Cup at home. Yearender 2021: Resurgence of Indian Hockey with Path-breaking Performance in Tokyo.

For India, winning a Test series against South Africa will be high on the 2022 wish list apart from shaping up for the T20 World Cup later in the year. New Zealand will be looking to give Ross Taylor a grand and happy farewell at home. Australia has got two matches left to complete a 5-0 Ashes thrashing of a hapless England, whose white-ball captain Eoin Morgan will be back to drawing strategies for winning the T20 World Cup. Expect 2022 to be a bigger bag full of unforgettable moments after 2021 gave a lot.

(The above story first appeared on LatestLY on Dec 31, 2021 02:36 PM IST. For more news and updates on politics, world, sports, entertainment and lifestyle, log on to our website latestly.com).