This year the fans witnessed 25 racers which means three circuits made their debut. The Qatar GP, Saudi Arabia GP and Vietnamese Grand Prix were the ones who made their debut this season. 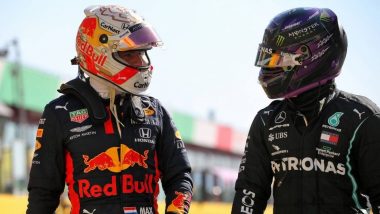 The Formula 1 2021 offered us quite a great season as Max Verstappen was crowned the F1 Champion 2021. He became the first Dutch racer to acquire this title and defeated his arch-rival, Lewis Hamilton. Now that the Formula 1 2021 season is over, as a part of our Year Ender 2021 series, we look back at how the sport panned out for the fans. The first change that the fans witnessed was in the number of races. So, the sport's commercial rights holders, Liberty Media had said that the sport would undergo an expansion and will even go beyond 22 planned races. This year the fans witnessed 25 racers which means three circuits made their debut. Sachin Tendulkar & Rohit Sharma React After Max Verstappen Outraces Lewis Hamilton At Abu Dhabi GP to Walk Away with F1 Championship 2021 Title.

The Qatar GP, Saudi Arabia GP and Vietnamese Grand Prix were the ones who made their debut this season. The Portuguese Grand Prix 2021 and Styrian Grand Prix were supposed to be a one-off event but were on the calendar this year. The likes of Azerbaijan GP 2021, United States GP, Monaco GP, French GP that were called off due to COVID-19 witnessed a comeback into the calendar. With this, there were also a few racers that were cancelled. The Singapore GP was called off due to safety and logistic concerns. The Chinese GP which was scheduled to happen in April 2021 was also cancelled owing to the travel restrictions. Canadian GP was canned for the second consecutive year and was replaced by Turkish GP. Whereas Japanese GP was cancelled.

The season also witnessed a few transfers in 2021. The racers moved from one team to another obviously for a good opportunity. However, one of the biggest highlights was Mick Schumacher debuting in Formula 1. Check out the list of transfers this season.

The Formula 1 2021 Championship came to a very interesting juncture where the Abu Dhabi Grand Prix 2021 became the deciding factor for the title winner. Both Max Verstappen and Lewis Hamilton were on the score of 369.5 and in the shocking turn of events, Max Verstappen was crowned as the champion.

That's well we have for now. If you think that we have missed out on any of the highlights of 2021 in Formula 1, do feel free to leave your comments below. We wish our fans a Very Happy New Year.

(The above story first appeared on LatestLY on Dec 30, 2021 02:36 PM IST. For more news and updates on politics, world, sports, entertainment and lifestyle, log on to our website latestly.com).