CSK vs DC, IPL 2019 Qualifier 2, Key Players: Shikhar Dhawan, MS Dhoni, Rishabh Pant And Other Cricketers to Watch Out for at VDCA Cricket Stadium in Visakhapatnam 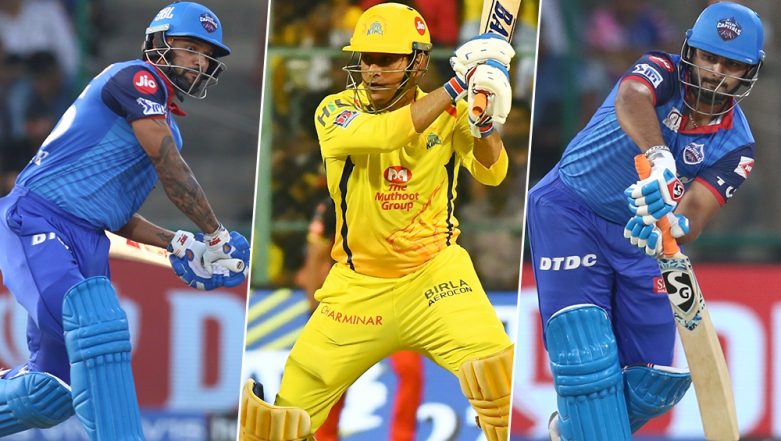 Key players to watch out for in CSK vs DC IPL 2019 Qualifier 2 (Photo Credits: IANS)

In the third playoffs match of the Indian Premier League (IPL) 2019, i.e. Qualifier, it will be Chennai Super Kings (CSK) locking horns with Delhi Capitals (DC) on May 10. The match will be played at Dr Y.S. Rajasekhara Reddy ACA-VDCA Cricket Stadium in Visakhapatnam. The contest will be a semi-final of sorts, as the winner will then meet Mumbai Indians in the IPL 12 Final. Ahead of CSK vs DC IPL 2019 Qualifier 2 Delhi Capitals Mentor Sourav Ganguly Was Seen Bonding With Chennai’s Spinner Harbhajan Singh (View Pic)

In the last two meetings in IPL 2019, it was Chennai Super Kings who emerged as the winners in both the matches. In the first match, Chennai chased the target of 148 runs with ease as they cantered to victory with 6 wickets in hand. In the second game, CSK won it comfortably by 80 runs, after DC skittled on 99, chasing a target of 180 runs. CSK vs DC Head-to-Head Record: Ahead of IPL 2019 Qualifier 2 Clash, Here Are Match Results of Last 5 Chennai Super Kings vs Delhi Capitals Encounters!

As time ticks away for the (semi-final) match tonight, we bring you a list of key players to watch out for in CSK vs DC, IPL 2019 Qualifier 2 match.

Chennai’s batting line-up has misfired badly this season. The only constant for them this IPL has been MS Dhoni, who has blown hot-and-cold this year too. Nonetheless, given the form that he is, Dhoni happens to be CSK’s most important player. After having an off-day against Mumbai Indians, Dhoni-led CSK cannot afford another slip-up against DC tonight. Chennai Super Kings vs Delhi Capitals Live Cricket Score Qualifier T20 Match.

After a sluggish start to his season, Shikhar Dhawan has found his groove in the second half of this IPL. In 15 matches he has played this year, Dhawan has scored 503 runs at an impressive average of 35.92. Dhawan has scored 61 Fours so far – the most by any batsman this season, and would be looking forward to carrying his tremendous form in the match.

Imran Tahir has had an amazing season this year. With 23 wickets this IPL, Tahir is only a couple of wickets away to topple Kagiso Rabada from being the Purple Cap holder. The leg-spinner seems to be in the form of his life and the feat is doable, give how DC’s line-up has struggled to score freely against spin bowling this season.

The x-factor that can be the difference between the two sides, Rishabh Pant, would be eyeing another flamboyant inning when he faces Chennai tonight. Pant couldn’t fire much in the previous two meets; however, he would be looking to make amends and ensure that his side makes it to the first IPL final in the league’s history. Given the form that he is in, CSK would need a PLAN A, B, or even C to stop him.

Deepak Chahar has had a great IPL season, this year. In 15 matches, Chahar has picked up 17 wickets – CSK’s second best bowler behind Imran Tahir. The young fast bowler has bowled stupendously well in the Powerplays and has often got wickets of the top order. If CSK is eyeing a record 4th IPL title, then Chahar would be a key player in their chances to conquer Delhi tonight.

Chennai Super Kings will be looking to put the disaster against Mumbai behind; whereas, Delhi Capitals, on the other hand, would be brimming high with confidence after winning the nail-biting thriller against Sunrisers Hyderabad. Who do you think will be the winner and seal the IPL 12 Final spot? Stay tuned to LatestLY for all the latest updates about Indian Premier League (2019)