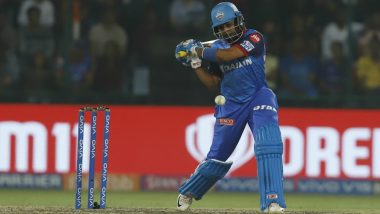 Delhi Capitals continued their winning run in Indian Premier League 2020 (IPL 2020) as they defeated Chennai Super Kings by 44 runs at the Dubai International Cricket Stadium on Friday (September 25, 2020). Prithvi Shaw scored his first half-century of the latest edition as the Delhi franchise registered their seventh win over the MS Dhoni-led side. CSK vs DC IPL 2020: Live Match Updates.

Delhi Capitals were put to bat first by Chennai Super Kings and they got off to a great start as Prithvi Shaw and Shikhar Dhawan registered a 94-run opening stand. Young Shaw scored his fifth IPL century but failed to convert it into triple figures as he fell prey to MS Dhoni’s brilliance behind the stumps. Late Cameo from Rishabh Pant took DC to a score of 175/3 in twenty overs. MS Dhoni Displays 'Spirit of Cricket' By Helping Prithvi Shaw During CSK vs DC Clash in IPL 2020, Fans Praise the Chennai Super Kings Skipper (See Tweets).

While chasing, Chennai Super Kings lost Shane Watson early who was quickly followed by Murali Vijay and Ruturaj Gaikwad. Faf Du Plessis and Kedar Jadhav provided some hope for CSK but following their departure, the Chennai side was not able to get going and suffered a 44-run defeat. Meanwhile, here are some stats from the game.

This win propels Delhi Capitals to the top of the points table as they have won both their games in IPL 2020. But a second lost on the bounce has seen Chennai Super Kings drop to fifth place in the points table and this position could be even lowered if other results go against the three-time champions.

Delhi Capitals will take on Sunrisers Hyderabad in their third game of IPL 2020 on September 29 while Chennai Super Kings meet the same oppositions on October 2. DC managed to qualify for the playoffs last season and they would be hoping to go all the way this time around.

(The above story first appeared on LatestLY on Sep 25, 2020 11:26 PM IST. For more news and updates on politics, world, sports, entertainment and lifestyle, log on to our website latestly.com).