Chennai Super Kings recovered from a horrible start to clinch a wonderful victory in the first match since the resumption of IPL 2021. Ruturaj Gaikwad was their star player, who scored 88 unbeaten runs and also anchored their innings, which gave them the opportunity to have a competitive total on board. 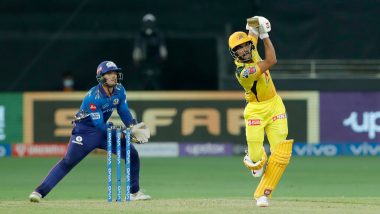 Chennai Super Kings on Sunday pulled off a remarkable win over defending champions Mumbai Indians in the first match of the second phase of this year's IPL at the Dubai International Stadium. This victory took them right to the top of the table. But it didn't look like they would win when Trent Boult had sent back Faf Du Plessis in the very first over of the innings. Well, that was actually the start of the collapse as in no time, Chennai found themselves in a heap of trouble at 24/4, with most of their batting stars already back in the hut. But Ruturaj Gaikwad had other plans. Despite having lost wickets at the other end, he maintained his composure, did not panic and also mixed caution with aggression. His 81-run partnership with Ravindra Jadeja was the point where Chennai had made a silent comeback in the match. CSK vs MI Highlights of VIVO IPL 2021: Chennai Super Kings Beat Mumbai Indians by 20 Runs

And Gaikwad made full use of his stay at the crease by unleashing some attractive shots, hitting a six off the last ball of the innings to help his side post a competitive 156/6. Mumbai Indians did get off to a brisk start with Quinton De Kock threatening to take the game away from Chennai quickly. Deepak Chahar, introduced into the attack, got rid of him and despite occasional bursts of boundaries, no Mumbai Indians batsman could actually grind it out like Gaikwad. Saurabh Tiwary was the only exception as the left-hander did try his best but in the end, there were just too many runs to get and not many deliveries left. Mumbai settled for 136/8, getting defeated by Chennai Super Kings, who scripted one of the most memorable wins of the IPL.

Here are some stats from the match:

(The above story first appeared on LatestLY on Sep 20, 2021 12:22 AM IST. For more news and updates on politics, world, sports, entertainment and lifestyle, log on to our website latestly.com).