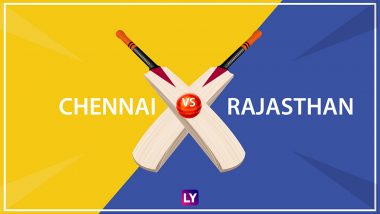 Abu Dhabi, October 18: Chennai Super Kings (CSK) and Rajasthan Royals (RR) have a chance to jump out of the bottom three of the IPL table when they face each other at the Sheikh Zayed Stadium on Monday. Both sides are on six points and CSK are one place above RR on sixth because of their superior net run rate. CSK's top order of Faf du Plessis, Shane Watson and Ambati Rayudu showed they have regained their touch in recent matches, while Ravindra Jadeja was also quite handy with the bat in their last game against the Delhi Capitals (DC).

However, the form of captain MS Dhoni could be a cause of concern. The veteran wicketkeeper batsman has not been able match up to the lofty standards he has set over the years with the bat this season. With 3,994 runs from 169 games, Dhoni is also the leading run-scorer for his side. The injury of Dwayne Bravo, whose bowling CSK are dependent upon in the death overs will be a cause for concern. CSK vs RR Preview: 7 Things You Need To Know About Dream11 IPL 2020 Match 37.

The bowlers did well in the initial overs against DC but failed to click recurrently, leading to Shikhar Dhawan's maiden IPL ton almost single-handedly snatching the game away from them.

On the other hand, RR too face similar issues. Their batsmen did well in the last game against Royal Challengers Bangalore (RCB), particularly Steve Smith and Robin Uthappa, who was promoted to the top of the order for that match.

The RR think-tank will, however, hope that Ben Stokes and the out-of-form Sanju Samson, also the highest run-getter for RR with 1,768 runs, will reverse their run of low scores as the league stage enters its home stretch.

Jofra Archer, RR's leading wicket-taker with 38 wickets from 29 games, will once again lead the bowling attack and will expect good support from Stokes to keep the CSK batters in check.

(The above story first appeared on LatestLY on Oct 18, 2020 08:55 PM IST. For more news and updates on politics, world, sports, entertainment and lifestyle, log on to our website latestly.com).