Former New Zealand captain Daniel Vettori is the frontrunner to be appointed senior assistant to Australian head coach Andrew McDonald, a report in The Age said on Tuesday. 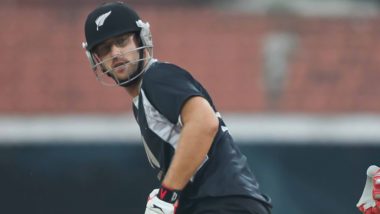 Melbourne, May 3: Former New Zealand captain Daniel Vettori is the frontrunner to be appointed senior assistant to Australian head coach Andrew McDonald, a report in The Age said on Tuesday. The 43-year-old ex-Kiwi all-rounder, who has more than 4,500 Test runs and 362 wickets in the longest format, was in Pakistan during Australia's white-ball leg in the sub-continent, and the reports said that, "it appeared likely that the former New Zealand captain will regularly link up with the national men's team as McDonald builds his support staff". Glenn Maxwell Could Still Be in the Test Mix in Sri Lanka, Says Aussie Coach Andrew McDonald.

The report added that Vettori -- who played in the Indian Premier League for Delhi Daredevils (now Delhi Capitals) and Royal Challengers Bangalore besides turning out for Brisbane Heat in the Big Bash League (BBL) -- and Michael Di Venuto will be McDonald's and Test and limited-overs captains Pat Cummins and Aaron Finch's "two key lieutenants". McDonald and Vettori had also previously worked as Royal Challengers Bangalore coaches, with the former being the bowling coach and the New Zealander being the head coach. The report added that the duo was supposed to coach Birmingham Phoenix in The Hundred, before the tournament was postponed for a year due to Covid-19. Mahela Jayawardene Picks Jasprit Bumrah in his Dream T20 Top-5 Picks.

The report added that the former Kiwi all-rounder could be available as early as the "Test match component of the Sri Lanka tour in late June, provided he and CA (Cricket Australia) can reach terms". "Among his Test match opponents, Vettori's 30 wickets at 26.36 in seven Tests in Sri Lanka make him a viable source of advice to spin bowlers in particular. Given McDonald's existing rapport and expertise for pace bowlers, Vettori would appear a complementary addition to a support staff that also must be replenished in other roles," the report said. McDonald has indicated that he is not averse to sharing his white-ball responsibilities with his assistant coaches.

(The above story first appeared on LatestLY on May 03, 2022 01:18 PM IST. For more news and updates on politics, world, sports, entertainment and lifestyle, log on to our website latestly.com).