Australia's newly-appointed men's cricket team head coach Andrew McDonald has said that he could be tempted to include limited-overs specialist Glenn Maxwell in the Test side during the upcoming multi-format series in Sri Lanka despite the all-rounder only figuring in the limited-overs side for the month-long series. 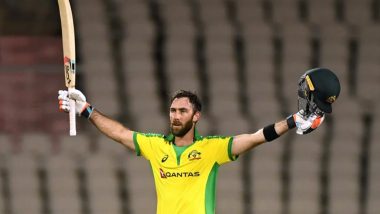 Melbourne, May 3: Australia's newly-appointed men's cricket team head coach Andrew McDonald has said that he could be tempted to include limited-overs specialist Glenn Maxwell in the Test side during the upcoming multi-format series in Sri Lanka despite the all-rounder only figuring in the limited-overs side for the month-long series. Despite speculation that his name would figure in the Test side as well, Cricket Australia (CA) last week named the 33-year-old player only in the white-ball squads. The limited -overs specialist has only played seven Tests during his career and the most recent of those was in 2017 when he made 38 and an unbeaten 25 against Bangladesh in Chattogram. Mahela Jayawardene Picks Jasprit Bumrah in his Dream T20 Top-5 Picks.

But the new coach, who took over from Justin Langer before the tour of Pakistan, is aware of Maxwell's prowess with the bat and ball, having played alongside the right-hander for Victoria last decade and then coached the 33-year-old later in his career. McDonald also knows how well Maxwell can perform on the sub-continent pitches and pointed to his amazing Test ton against India in Ranchi. "It is always a contemplation (to include Maxwell) and I think with 32 players being there (in Sri Lanka) at the one point in time all options are still open," McDonald said on SEN on Tuesday. "So you never know with what is going to happen. He has got a great record in the sub-continent, and in India in particular with that hundred in Ranchi and he can also give us off-spin." IPL 2022: Rinku Singh’s Remarkable Journey to IPL Success.

McDonald said it was imperative for Cricket Australia to be loyal to the Test side that won the three-match Test series against Pakistan 1-0 in March, and that was one of the reasons for Maxwell missing out of a Test berth. "There was a small discussion about what it (including Maxwell) potentially looked like, but (we felt we needed to) reward the team that went to Pakistan and how that squad went about its work. It was always going to be very difficult to change." The tour against Sri Lanka begins on June 7 with the first T20I. The Test series will commence on June 29.

(The above story first appeared on LatestLY on May 03, 2022 11:01 AM IST. For more news and updates on politics, world, sports, entertainment and lifestyle, log on to our website latestly.com).