Sri Lankan legend and the International Cricket Council (ICC) Hall of Famer, Mahela Jayawardene has nominated Afghanistan's Rashid Khan, Pakistan's Shaheen Afridi, Indian pace bowler Jasprit Bumrah, England's Jos Buttler and Pakistan's Mohammad Rizwan as the first-five players he would pick if he were in charge of selecting a dream T20 side. 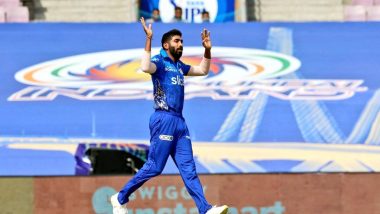 Mumbai, May 3: Sri Lankan legend and the International Cricket Council (ICC) Hall of Famer, Mahela Jayawardene has nominated Afghanistan's Rashid Khan, Pakistan's Shaheen Afridi, Indian pace bowler Jasprit Bumrah, England's Jos Buttler and Pakistan's Mohammad Rizwan as the first-five players he would pick if he were in charge of selecting a dream T20 side. The Mumbai Indians head coach has also said that he would like to call on West Indian stalwart Chris Gayle if he could choose one star at their prime to join the dream T20 side. Jayawardene told the ICC Review that Afghanistan cricketer Rashid Khan was an ideal spinner who could bat lower down the order. Rashid has so far played 58 T20I and taken 105 wickets at 12.92 runs a piece, with an economy rate of slightly above six. IPL 2022: Rinku Singh’s Remarkable Journey to IPL Success.

"For me the bowlers are the most important aspect of T20 cricket and Rashid Khan is a proper spinner that can bat," Jayawardene said. "He is a very good No. 7 or No. 8 batter and you can use him in different circumstances depending on your combinations. He can also bowl in different phases of an innings like during the powerplay, the middle overs and also at the death he is not a bad option depending on the conditions, so Rashid would be my first pick." For tall Pakistan pace bowler Shaheen Afridi, whose current ICC T20I Bowling Ranking is 10th, Jayawardene said, "I am going to go with two more bowlers actually and the first one is going to be a left-armer in Shaheen Afridi."

Afridi has so far played 40 T20Is, taking 47 wickets at an average of 24.31, with an economy of 7.75. He also had a remarkable ICC T20 World Cup in the UAE last year. "He had a great World Cup last year, bowls very well with the new ball and is more than capable of getting some swing early too. He is a wicket-taking option too that bowls very well at the death as well, so can be considered a good attacking option." Jayawardene also singled out Jasprit Bumrah, whose current ICC T20I bowling ranking in 28, for special praise, saying that he has always admired the Indian pacer's bowling.

"Jasprit Bumrah is a guy I have always admired as he is capable of bowling in different phases of an innings. He is another wicket-taking option and, when you need guys to close an innings off, there is no one better than Jasprit Bumrah." Bumrah has consistently taken wickets in T20 cricket and has played 57 T20Is for the country, taking 67 wickets at an average of 19.89 and an economy rate of 6.50.

England batter Jos Buttler's form in the IPL is to be seen to be believed, and Jayawardene said about the talented opener that, "I would probably open the batting with Jos. He is very aggressive and plays both pace and spin well. He has been in great form at the IPL of late and did well at the last T20 World Cup as well where he played really well in tough conditions in the UAE." Buttler has representing his country in 88 T20Is, scoring 2,140 runs at an average of 34.51 and a health strike-rate of more than 141 . KKR vs RR, IPL 2022: Kolkata Showed Character To Bounce Back After Five Defeats, Says Coach Brendon McCullum.

Jayawardene said the versatility of Pakistan's wicketkeeper-batter Mohammad Rizwan, currently ranked No. 3 on the ICC T20 batter's ranking, makes him a valuable player. "The next option is the wicketkeeper-batter and I am going with Mohammad Rizwan. I know he does often open the batting for Pakistan, but I think he can bat in that middle order. He is a good player of spin and a very busy player." Rizwan has so far played 56 T20Is, scoring 1,662 runs at an average of 50.36.

Asked as to which player he would bring out of retirement to play in his Dream XI, Jayawardene nominated former West Indies opener Chris Gayle. "I would take a 30-year-old Chris Gayle to open the batting with Jos Buttler and that would be an awesome combination," Jayawardene said. "Chris would just stand still and hit and Jos would have to do all the running for him. He was at his peak at that first T20 World Cup in South Africa in 2007 and that inaugural century against South Africa was something special. I would take Chris at the top of the order as he can change a game," opined Jayawardene.

(The above story first appeared on LatestLY on May 03, 2022 10:50 AM IST. For more news and updates on politics, world, sports, entertainment and lifestyle, log on to our website latestly.com).