Australian Cricket team opening batsman pair David Warner and Aaron Finch scored a century each during India vs Australia 1st ODI 2020 which is being played at Wankhede Stadium in Mumbai. Australia is all set to take a lead in three matches ODI series, as they require only a few runs to reach the target of 256 runs. 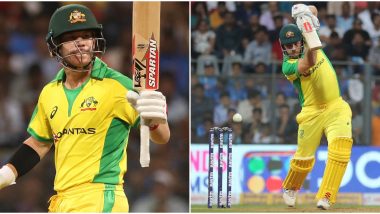 Australian Cricket team opening batsman pair David Warner and Aaron Finch scored a century each during India vs Australia 1st ODI 2020 which is being played at Wankhede Stadium in Mumbai. Australia has taken a 1-0 lead in three matches ODI series, as they chased down the target of 256 runs in 37.4 overs. Australian skipper Aaron Finch and Dawid Warner both have made Indian fielders run all around the park. India Vs Australia, Live Cricket Score 1st ODI Match.

Australia had won the toss in this game and elected to bowl first. Except for Shikhar Dhawan and KL Rahul, none other Indian batsmen played a decent inning as wickets went on to fall in quick succession in the end. Rishabh Pant after making a good start, yet again failed to convert his inning into a big score as he got dismissed by Pat Cummins at 28 runs. Pant has also suffered a concussion in this dismissal and has not come out to do wicket-keeping. KL Rahul is doing the job behind the wicket. David Warner Becomes Fastest Australian Batsman to Score 5000 Runs, Achieves Feat During IND vs AUS 1st ODI 2020.

David Warner has also become the fastest Australian batsman to score 5000 runs in ODIs, as he took only 115 innings to achieve the feat. Both Australian have batted comfortably and taken their team across the line in 37.4 overs. The partnership between Finch and Warner of 238 runs is the highest at Wankhede. During Indian inning, Mitchell Starc and Pat Cummins displayed some good bowling as they both bagged together five wickets. India will play against Australia in the 2nd ODI at Rajkot on Jan 17, 2020.

(The above story first appeared on LatestLY on Jan 14, 2020 08:22 PM IST. For more news and updates on politics, world, sports, entertainment and lifestyle, log on to our website latestly.com).