The Australian played one of his best knocks in the IPL, looking in red hot form and helping Delhi Capitals get an important win against his former side, a team he had led to their only IPL title. Rovman Powell also scored his maiden IPL fifty in this game, taking Delhi to that huge total. 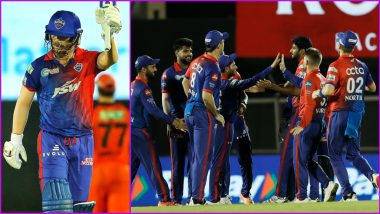 David Warner got some sweet revenge on his former side as he led Delhi Capitals to a 21-run victory over Sunrisers Hyderabad in IPL 2022 on Thursday, May 5. After an uneasy departure from the Orange Army last season, the Australian showed what the 2016 champions missed with a sensational 92-run unbeaten knock off 58 deliveries to take his side to a massive 207/3.  He was ably assisted by an equally belligerent knock from Rovman Powell, who hit his way to a sensational 67 off 35 deliveries. Their 122-run stand was what stood out to be the difference between the batting performances of the two teams. While defending the total, Khaleel Ahmed took three wickets as Delhi Capitals ended up with a 21-run win. Fastest Ball in IPL 2022: Umran Malik Clocks 157 kph During DC vs SRH Match

Chasing 208 was always going to be tough against a quality bowling attack like that of Delhi and Sunrisers did not get off to an ideal start, as they lost Abhishek Sharma in the very second over. Skipper Kane Williamson's struggles with the bat continued as he could muster just four from 11 balls. Sunrisers did fight back with a 60-run partnership between Aiden Markram (42) and Nicholas Pooran. The duo kept SRH in the game but Markram's departure in the 13th over dented his team's hopes. Eventually, it was left to Pooran who did well to score 62 off 34 deliveries. But the result was sealed when Shardul Thakur got him in the 18th over.

Earlier, it was a Warner show in Brabourne as he unleashed his best against his former side, with whom he parted ways in bitter terms last year. The left-hander was at his destructive best as he smoked all the bowlers to all parts of the ground, taking a liking to Umran Malik, who did not find any rhythm on the night. Though he clocked 157 kph in the last over, it was a performance he would aim to forget soon. Warner was supported brilliantly by Rovman Powell, who showed what he can do if given a chance to bat higher up than he usually does. The West Indian scored his maiden IPL fifty with three fours and six huge sixes.  Despite bowling ruthlessly fast, Umran Malik had a day to forget as he conceded 52 runs in four overs.

#The Australian also became the one with most fifties in T20 cricket- 89.

Delhi Capitals will now look forward to continuing their good form against defending champions Chennai Super Kings on May 8. Sunrisers Hyderabad on the other hand, will aim to resurrect their campaign when they face Royal Challengers Bangalore on the same day.

(The above story first appeared on LatestLY on May 06, 2022 12:05 AM IST. For more news and updates on politics, world, sports, entertainment and lifestyle, log on to our website latestly.com).