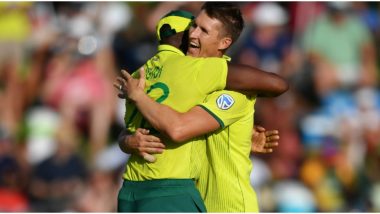 South African pacer Dwaine Pretorius will take a knee in support of the Black Lives Matter (BLM) movement when cricketers take the field for the first match of the 3TC Solidarity Cup tournament on Saturday. The tournament will mark the return of cricket in South Africa after a four-month hiatus due to the coronavirus pandemic. The 31-year-old wrote in a post on his Facebook page he stands in solidarity with Lungi Ngidi, who faced criticism from two former Protea cricketers for his stand on BLM movement. Lungi Ngidi Finds Support From 31 Former and Current South African Players on ‘Black Lives Matter’ Stance.

Alongside a picture of him and Ngidi, Pretorius wrote: “I will be proudly supporting the BLM movement and I will be taking a knee on Saturday.” The BLM movement in South Africa attracted controversy when two former Protea players, Pat Symcox and Boeta Dippenaar, accused Ngidi of trying to convince his teammates to support his stance after the pacer publicly voiced his support for the BLM movement. Both Symcox and Dippenaar are white cricketers. Darren Sammy Backs Lungi Ngidi After Former South Africa Players Criticise Pacer on Black Lives Matter Stand.

But Ngidi received full support from other players of the black and brown community with 36 black and brown former players and coaches releasing a statement in support of Ngidi and also stating that they themselves faced and suffered racial discrimination during their careers. Hashim Amla, who is of Indian descent, also voiced his support for Ngidi with a post on Instagram.

“I honestly and wholeheartedly believe it’s the right thing to do. I also believe taking the knee is only the start. To me, the BLM movement stands for the most basic right all people across the world deserve and that is the right to not be judged or segmented because of his/her colour. But rather for WHO they are,” he wrote on Facebook.

“It’s not a movement that says: ‘Black lives are MORE important than any other colour.’ It’s my brother from another mother asking me please see me for WHO I am and don’t persecute me because of my skin colour. Give me the same benefit of the doubt you would given someone with the same colour as you. Yes, the movement says “Black” but I believe it’s relevant to any color and race.

“We are all equal and loved the same way by God. There are no exceptions. I would love to see my boy one day live in a world where colour has no judgement,” he added in the post. It’s time to be the change you would like to see in the world.”

(The above story first appeared on LatestLY on Jul 17, 2020 11:08 AM IST. For more news and updates on politics, world, sports, entertainment and lifestyle, log on to our website latestly.com).