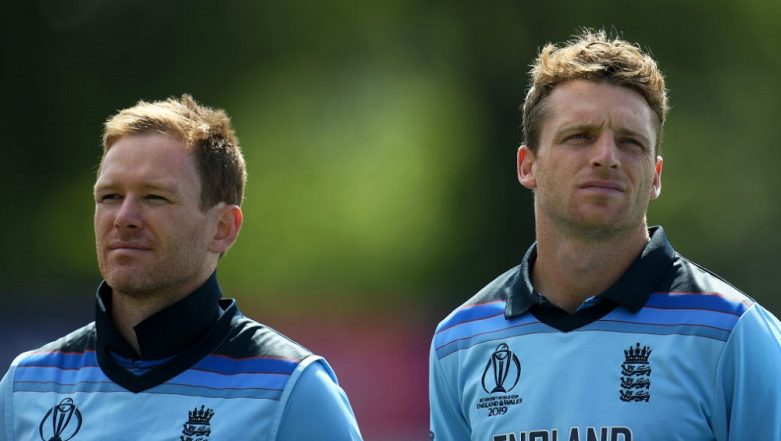 Hosts England will aim to extend their two-match winning run when they face a beleaguered Afghanistan in match no 24 of ICC Cricket World Cup 2019. The England vs Afghanistan match will be played at the Old Trafford Cricket Ground in Manchester. While England has won three and lost just one in their four CWC19 matches so far, Afghanistan are yet to open their points tally and have lost all four of their matches in the tournament. England thrashed West Indies in their previous encounter, while Afghanistan went down to South Africa. The toss took place at 2.30 PM. England captain Eoin Morgan won the toss and elected to bat first.  James Vince and Moeen Ali has been included in the playing XI for the injured Jason Roy and Liam Plunkett for England, while for Afghanistan Dawlat Zadran, Najibullah Zadran and Mujeeb-ur-Rahman are playing in place of Aftab, Zazai and Hamid. England vs Afghanistan Cricket Score 24th ODI Match.

England beat Afghanistan by nine wickets in a rain-curtailed match the only time these two sides met in World Cup history. Afghanistan were making their debut at ICC’s elite competition in 2015 when that match occurred. They have come a long way since then but their World Cup record seems only to get worse. The Afghans won one from six games in the last edition of the World Cup and so far has failed to win any of their matches. England, in contrast, were eliminated in the group stages last time but are among the favourites to lift CWC 2019. They are ranked fourth in the points table with three wins and six points, while Afghanistan has no win and unfortunately no points. They are the only side yet to register a victory in 2019 World Cup. England vs Afghanistan Live Cricket Score of ICC World Cup 2019 Match.

Afghanistan are in a must-win situation and another defeat will take Afghanistan closer to the exit door. England, meanwhile, among the favourites to make it to the semi-finals but will have to beat Afghanistan and win most of their remaining matches, especially with a rejuvenated Bangladesh breathing down their neck. The Bengal Tigers are in fifth place with five points.