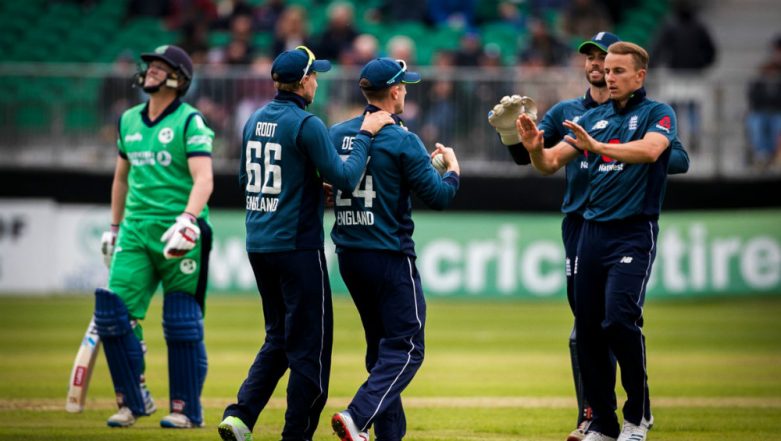 Dublin, May 4: England survived a scare against Ireland as they secured a hard-fought four-wicket win over the minnows in the lone One-Day International (ODI) played in Malahide.

Chasing 199, England were in all sorts of trouble with 101/6 on the board on Friday. However, Ben Foakes' unbeaten 61 and 47 not out from Tom Curran helped guide the top-ranked ODI side to a scrappy victory at Dublin in a match that was reduced to 45-overs a side because of wet outfield.

Ireland, who have beaten England just once in their previous seven meetings in the dramatic World Cup group game in 2011, could have possibly won the match had they reviewed a close lbw shout against Foakes when he was on 37. However, the debutant stayed at the crease and ensured England did not suffer any further damage and begin their summer on a losing note.

For Ireland, Joshua Little was the pick of the bowlers as he returned with figures of 4/45 in his eight overs. He took the priced wickets of James Vince (18), Dawid Malan (24), Joe Root (7) and Eoin Morgan (0) to send jitters in the England camp.

Earlier, it was Liam Plunkett who restricted Ireland to a paltry 198. He was highly impressive with the new ball as he returned with figures of 4/35. Paul Stirling (33) was the top scorer for Ireland, followed by Mark Richard Adair (32).

England will now travel to Cardiff where they will take on Pakistan in the one-off T20I on Sunday before the five-match ODI series.