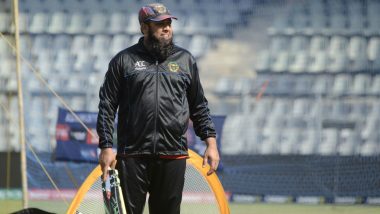 Lahore, Aug 15: Former skipper Inzamam-ul-Haq has lashed out at Pakistan batsmen for their defensive approach in the ongoing second Test against England being played at the Ageas Bowl in Southampton.

Pakistan have so far scored 223 runs for the loss of nine wickets in their first innings in the 86 overs played across the two days of the Test match, with rain and bad light playing spoilsport on both the days. Only Abid Ali (60) and Mohammad Rizawn (60*) have been able to tackle the England bowlers so far in the match.

"Pakistan batsmen were scared of playing their shots. If you look at most of their dismissals, their bat was behind their leg," Inzamam said on his YouTube channel.

"When you meet the ball, your bat should be ahead of your leg. You are getting caught at slips because you are employing a defensive approach."

The 50-year-old said that Pakistan should play an aggressive brand of cricket as only then they can defeat England in their own backyard.

"I request the batsmen and team management to play aggressive cricket, in order to beat England. Otherwise, we will be depending on rain to save us in this Test," he said.

Pakistan are 0-1 down in the ongoing series after losing the opening Test by three wickets at Old Trafford. They need to win or draw the ongoing Test to keep the three-match series alive.

(The above story first appeared on LatestLY on Aug 15, 2020 01:34 PM IST. For more news and updates on politics, world, sports, entertainment and lifestyle, log on to our website latestly.com).