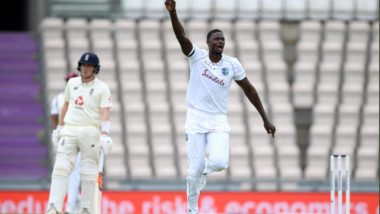 After a majority of the day 1 being washed out yesterday, we had cricketing action today at Southampton. On the day 2 West Indies blowers ripped the batting line-up of the hosts and bundled them out before tea on the score of 204 runs. Jason Holder was the man for the Windies as he snapped six wickets for the side. After bad light interrupted the play, the scorecard for West Indies read 57/1.  In this article, we bring you the stat highlights of the game. But before that let’s have a look at how the day 2 of the match panned out for both the sides. Jason Holder Hailed by Netizens as he Surpasses His Previous Best Bowling Figures During ENG vs WI, 1st Test 2020.

So on day one we only had the wicket of Dominic Sibley. But with the start of day two, wickets kept falling and the hosts could not survive the lethal line and length by the Windies. Ben Stokes was the only one who could reach a total of 43 runs. Titbits from others helped England reach a total of 204 runs. Jason Holder snapped six wickets and the remaining ones were snapped by Shannon Gabriel.  Windies came on to bat and lost John Campbell on 28 runs. Currently, the scoreboard reads 57/1/

# Jason goes past Vanburn Holder getting 111 wickets in 41 Tests. Whereas the latter as 109 wickets in 40 Test matches.

# Rory Burns is the second opener to score 1,000 Test runs after the retirement of Andrew Strauss in 2012. Alastair Cook was the first one.

# This is the first time that Jofra Archer and Mark Wood playing together Test match cricket.

Windies team would surely want to capitalise on the start that they have made. Their batting would depend on the kind of conditions the Ageas Bowl would have to offer the two batsmen-  Shai Hope & Kraigg Brathwaite.

(The above story first appeared on LatestLY on Jul 09, 2020 11:31 PM IST. For more news and updates on politics, world, sports, entertainment and lifestyle, log on to our website latestly.com).