Every sport helps teammates, rivals forge friendships that in many cases lasts a lifetime. Cricket is among such sports. As the number of games keeps increasing and teams travel continents playing different oppositions, as players travel around the world taking their craft to every corner friendship has become the quintessence of the games. 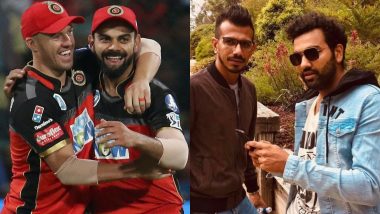 Sports bridges the gap and transcends boundaries uniting people of different race, ethnicity, colour and religion. Rivals on the field often become the best of friends off it. Vivian Richards and Ian Botham are the greatest blueprints of it. They played for nations that shared long cricketing rivalry but have remained the best of friends even years-long after they bid adieu to the game. Often teammates that have played together for many years or grew up playing together have become the best of friends. Friendship Day 2020 Date in India: Know The Significance, History And Celebrations of the Day Dedicated to Friends.

Every sport helps teammates, rivals forge friendships that in many cases lasts a lifetime. Cricket is among such sports. As the number of games keeps increasing and teams travel continents playing different oppositions, as players travel around the world taking their craft to every corner and displaying it in different leagues, friendship has become the quintessence of the games. As the world celebrates, World Friendship Day 2020, take a look at some of the best friendships in cricket. Friendship Day Funny Memes and Jokes Because Tagging Your Friend in a Relatable Post Is the New Virtual Friendship Band!

Two of cricket’s biggest legends, Ian Botham and Viv Richards are the best of friends in real life. They played for England and West Indies and shared some of the game’s biggest rivalries but have always been fond of each other. They shared a room for several years when playing for Somerset in English County cricket and have made sure to be present in each other’s important life moments.

If Andrew Symonds and Harbhajan Singh were examples of how the IPL could end rivalries, Virat Kohli and AB de Villiers are the essences of what it did to friendships. Both play for the Royal Challengers Bangalore and have been at the franchise for the last nine years together during which their friendships have only grown. They are best friends now.

They stuck together during times of adversary and showed how strong the bond was. Both have a taste for fashion and chill music and the rumours say that’s what connects them best. KL Rahul and  Hardik Pandya are two of the best friends in the Indian team and have often their flaunted their friendship with identical pictures online.

Sachin Tendulkar and Sourav Ganguly knew each other long before they even realized they would become two of India’s greatest ever cricketers. Ganguly and Sachin shared a room during their junior years and also during their time with the Indian cricket team. Their strong friendship has remained intact even after retiring and these days they can be seen pulling each other’s legs online.

They are another set of close friends in the Indian cricket team dressing room. Rohit Sharma and Yuzvendra Chahal are often seen together during overseas tours and enjoy great chemistry with each other. Both pull each other’s legs and also make fun of each other’s social media posts frequently.

(The above story first appeared on LatestLY on Aug 02, 2020 08:15 AM IST. For more news and updates on politics, world, sports, entertainment and lifestyle, log on to our website latestly.com).