Upset wins in major tournaments like the T20 World Cup are always memorable and winning sides, who are on most occasions, counted out as minnows experience immense joy as they watch their names being etched in cricketing folklore. In this article, let us take a look at five such thrilling upsets in the past T20 World Cups 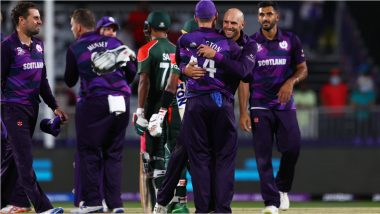 Cricket fans are already swooning to Scotland upsetting Bangladesh in a Round 1 fixture on Sunday, October 17. An upset is always entertaining more so because it is something that happens against expectations. On one side, the winning team erupts into jubilation, ecstasy and joy while shock runs through the veins of the side who unfortunately find themselves on the wrong side of the result. ICC T20 World Cup 2021, Round 1: Chris Greaves' All-Round Performance Helps Scotland Stun Bangladesh in Group B

1) Zimbabwe beat Australia (T20 World Cup 2007): It was one of the first known upsets in the very first edition of the T20 World Cup. The South Africa edition of the tournament had its own excitement and uncertainty and Zimbabwe added to the thrill by beating the reigning 50-over champions Australia. The African side put up a good bowling performance, restricting the batting-heavy Australian side to just 138/9 in their 20 overs. Brendan Taylor then led the chase for Zimbabwe, scoring 60 runs off just 45 balls, hitting four fours and two sixes to ensure his side went home with full points and a memorable win, which would go down in Zimbabwe's cricket history as being one of the best. Scotland Beat Bangladesh by 6 Runs: Netizens Congratulate Scottish Side for Pulling Off Upset Win in First Round of T20 World Cup 2021

2) Afghanistan beat West Indies (T20 World Cup 2016): Competing in their second T20 World Cup, Afghanistan gave the world a taste of the surprise they brought into cricket by defeating heavyweights West Indies. The victory was all the more special and comprehensive as it was a low-scoring total and a team effort saw Rashid Khan and co pull off a sensational win against the eventual champions of the competition. Batting first, they could manage just 123/7 and West Indies were firmly on top to clinch the win in Nagpur. But that wasn't part of the Afghanistan script as they took wickets in regular intervals, eventually restricting the T20 specialists 117/8 winning the contest by six runs.

3) Hong Kong beat Bangladesh (T20 World Cup 2014): Well, Scotland's win over Bangladesh wasn't the first time that the Asian side has been handed an upset defeat. Earlier in the 2014 T20 World Cup, Bangladesh were surprised by a Hong Kong side, who went on to win a contest by the narrowest of margins (two wickets). Batting first, Bangladesh were shot out for 108 runs with Hong Kong's Nadeem Ahmed scalping four wickets for just 21 runs. In response, Hong Kong found themselves in trouble at 50/5, but they held their nerve to ensure that they got over the line at the end.

4) Netherlands beat England (T20 World Cup 2009): In just the second T20 World Cup in 2009, Netherlands went on to inflict an upset defeat on hosts England. England got off to a good start batting first, eventually posting 162/5 in their 20 overs. Netherlands though, made things interesting by losing wickets regularly in their chase, What they did well was to never fall behind and kept fighting, eventually winning the match in the last over with four wickets.

5) Scotland beat Bangladesh (T20 World Cup 2021): Well, this would not be forgotten soon. Bangladesh walked into this clash as the overwhelming favourites to win this one and even go through easily to the Super 12 stage. But a certain Chris Greaves stood in their way. He blasted 45 quick runs off just 22 balls and helped Scotland reach a decent 140/9 at the end of 20 overs, He was not done for the night yet. Returning with the ball, he scalped the crucial wickets of Shakib Al Hasan and Mushfiqur Rahim to derail Bangladesh and eventually thwart their run-flow, choking them out by six runs.

(The above story first appeared on LatestLY on Oct 18, 2021 10:38 PM IST. For more news and updates on politics, world, sports, entertainment and lifestyle, log on to our website latestly.com).