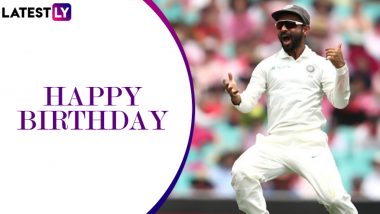 India’s deputy Test Captain Ajinka Rahane celebrates his 32nd birthday on Saturday (June 6, 2020) and wishes are pouring in for him from all around the world. The Mumbai-born batsman has been blessed with an impeccable technique and his numbers speak volumes of his prowess. Be it tackling the spinners in the rank turner of Feroz Shah Kotla, neutralizing the swing in the green track of Lord’s or facing the thunderbolts of Aussie pacers in Perth, the right-handed batsman rose to all the occasions and emerged as the cornerstone of the national team. Apart from his batting prowess, Rahane has also proved his mettle as a leader. Ajinkya Rahane Birthday Special: Interesting Facts About India’s Deputy Test Captain.

The star batsman made his T20I batsman alongside Rahul Dravid against England in 2011. Well, that was also the last T20I of Dravid. However, who knew that Indian cricket has got a new ‘Mr. Dependable.’ On numerous occasions, Rahane came to his side’s rescue when the top-order fell like a pack of cards. So far, he has piled up 4203 runs in 65 Tests with 11 centuries. Mostly known for his heroics in red-ball cricket, Rahane has 2962 in 90 ODIs. Also, one should not forget his abilities as a fielder. On the occasions of the batsman’s birthday, his fans went frenzy as #AjinkyaRahane became one of the top trends on Twitter. Meanwhile, have a look at how they wished him. Ajinkya Rahane Birthday Special: 10 Pictures of India’s Test Vice-Captain That Will Give You Family Goals.

The Indian Vice-Captain turns 32 today, Ajinkya averages 51.22 in 21 test matches away from home.

Is he India's best Batsman away from home in Tests ?#HappyBirthday #AjinkyaRahanepic.twitter.com/Ru9pGGMtry

~ 5th Indian Batsman to score centuries in each innings of a Test.

~ 1st batsman to hit six fours in an over in IPL.

🏏Highest Number of catches by a Non-Wicketkeeper in a single Test match (8).

Happy birthday to one of the best legendary middle order batsman and great fielder @ajinkyarahane88 .

Rahane was last seen during the Test series between India and New Zealand earlier this year. His next assignment was set to get underway in IPL where he would have played his first season for Delhi Capitals. Unfortunately, however, just like many other major tournaments around the world, the T20 extravaganza also got postponed owing to the COVID-19 pandemic. Nevertheless, many reports suggest that the IPL 2020 can take place in October as the ICC T20 World Cup is likely to get shifted.

(The above story first appeared on LatestLY on Jun 06, 2020 10:33 AM IST. For more news and updates on politics, world, sports, entertainment and lifestyle, log on to our website latestly.com).