Ajinkya Rahane Birthday Special: 10 Pictures of India’s Test Vice-Captain That Will Give You Family Goals 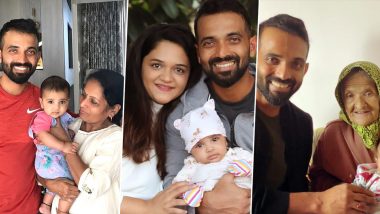 India's Test vice-captain Ajinkya Rahane celebrates his 32nd birthday on Saturday. Born on June 6, 1998, the right-handed batsman is a cornerstone of the Indian team in red-ball cricket and his numbers speak volumes of his prowess. Currently placed at ninth position in ICC Test batting rankings, the right-handed batsman has been blessed with an impeccable technique courtesy which he tasted success not just on Indian soil but overseas too. Rahane has also proved his mettle in limited-overs cricket as he has been one of the most consistent batsmen in the Indian Premier League (IPL). However, along with being a backbone of the Indian cricket team, Rahane is pure family man off the field and one can visit his official Instagram page to verify the fact. Ajinkya Rahane Birthday Special: Interesting Facts About India’s Deputy Test Captain.

Hailing from a humble background, Rahane's journey to success was filled with hardships and sheer determination. His mother Sujata used to walk miles with him from home to the cricket academy while his father Madhukar worked in a Mumbai’s transportation company. In fact, his love story also makes a perfect script for a Bollywood Blockbuster. After years of dating, the talismanic batsman married his childhood love interest Radhika Dhopvakar on September 26, 2014. Five years later, the couple got blessed with a baby girl on October 5, 2019, and they named her Aarya. ‘His Body Can Bend When He Moves’: Suresh Raina Picks Ajinkya Rahane As the Best Indian Fielder.

The veteran cricketer has also been quite active on social media and has been frequently posting photos and videos with his loved ones. Well, everyone knows about Rahane's commitment on the field. However, the batting great has also been fulfilling his off-field duties with perfection. So, as the star cricketer turns a year older, let's look at some pictures which will give you family goals. Ajinkya Rahane Takes Up Yuvraj Singh's ‘Keep It Up’ Challenge Amid COVID-19 Lockdown (Watch Video).

Rahane With His 'Best Half'!!

Not only my better half, but my best half. Wish you loads of happiness and a very happy birthday Rads ❤️

She’s one of my biggest strengths and a pillar of support. Happy Birthday aai!! 😊

I am what I am because of THEM! Wishing a very happy Women's Day to all the powerful women out there who make the world a better place! #WomensDay

My आजी. My inspiration. My Hero. Time well spent with my family

And That's What You Call A Perfect Family Pic!!

Best wishes for the new year from the Rahanes 😊

All Hearts For Aarya!!

#Throwback to being touristy

The love and support of your siblings are some of the best gifts of life. Wishing you all a very happy Raksha Bandhan in a day advance! #RakshaBandhan2019

The star batsman was last seen during the Test series between India and New Zealand earlier this year. His next assignment was set to get underway in IPL where he would have played his first season with Delhi Capitals. Unfortunately, however, just like many other major tournaments, the T20 extravaganza also got postponed owing to the COVID-19 pandemic. Nevertheless, many reports suggest that the IPL 2020 can take place in October as the ICC T20 World Cup is likely to get shifted.

(The above story first appeared on LatestLY on Jun 06, 2020 09:30 AM IST. For more news and updates on politics, world, sports, entertainment and lifestyle, log on to our website latestly.com).