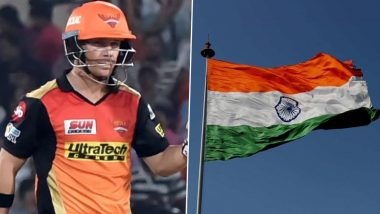 As India celebrates its 74th Independence Day on August 15 2020, people of the nation are marking the day with immense pride and honour. On the occasion, in fact, swashbuckling Australian batsman and Sunrisers Hyderabad captain David Warner took to Instagram and wished all his Indian fans. The southpaw has played a lot of cricket in India and has immense popularity among the cricket fans. On many previous occasions too, the left-handed batsman has expressed his love for India he didn’t miss out on the opportunity to wish Indians of the auspicious day too. Anil Kumble, KL Rahul and Other KXIP Members Wish Indians on 'Swatantrata Diwas.'

“To all my friends and Fans in India Happy Independence Day #india #love #secondhome,” wrote the 33-year-old while sharing a picture of Indian national flag on Instagram. Fans were enthralled seeing Warner’s tribute as they filled the comment section with love. Many SRH fans also backed Warner to showcase his blitzes in the 2020 edition of the Indian Premier League which is set to get underway in UAE on September 19. Meanwhile, let’s look at Warner’s post on Independence Day 2020. SRH Squad for IPL 2020 in UAE: Check Updated Players' List of Sunrisers Hyderabad Team Led by David Warner.

Before participating in the Indian Premier League, Warner will tour England for three T20Is and as many ODIs. Hence, he will miss the first few matches of the tournament alongside several England and Australian players. Nevertheless, he’ll lead the team in the majority of the tournament and will like to guide his side to the title. Warner’s SRH tasted glory in 2016 and it’ll be interesting to see if the Orange Army can lift their second IPL title or not.

(The above story first appeared on LatestLY on Aug 15, 2020 10:51 PM IST. For more news and updates on politics, world, sports, entertainment and lifestyle, log on to our website latestly.com).