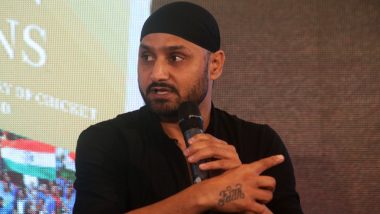 Former Indian spin-bowler Harbhajan Singh has slammed the Indian team management over dropping Yuzvendra Chahal from the playing XI and choosing Krunal Pandya instead, in the first T20I against Australia at Brisbane. Harbhajan said that his former Mumbai Indians colleague is not the kind of spin bowler India can afford to bowl his quota.

Harbhajan Singh said that Krunal Pandya doesn’t spin the ball much and instead bowls fast. Talking to India Today, he said, “We might not see Krunal Pandya batting at 6 and bowling his four overs. He is more of a bowler who bowls a few overs here and there, but in Australia, you need someone else to bowl those four overs because he doesn't spin the ball and bowls it really, really fast.” India vs Australia 2018-19 Test Series: Aussies Announce 14-Man Squad For First Two Matches, Uncapped Marcus Harris & Chris Tremain Surprise Inclusion in the Team.

The former Indian bowler also said that team India should focus on the team composition and combination, moving ahead, as the ICC World Cup 2019 nears. He commented, “That [team combination] is something that they have to look at. Whenever Kuldeep and Chahal have bowled together, they have taken wickets, put pressure on the opposition, and they have been quite successful as a pair. That is where the Indian cricket team have to think about what is the combination going forward.”

Even the great Sunil Gavaskar was sceptical of Virat Kohli’s decision to demote himself at number 4 and instead send KL Rahul on number 3. During the post-match show, Gavaskar said, “I don't think Kohli should have batted at No.4. In the first match of the tour, you want to bat on the position you generally bat on. It is only when you have won a series, you take such chances.”

Michael Clarke, who was also on the show, agreed with the former Indian cricketer. Clarke said, “Virat Kohli is that batsman who can come in, take a few balls and bat till the end and win you games. I would want to see him bat up the order at No.3. He can even open but not go down the order.”

Australia had posted 158 runs for the loss of 4 wickets on the board. However, the rain interruption shortened it to a 17-overs-a-side game. India failed to chase the target of 174 as it eventually lost the rain-truncated match by 4 runs (D/L method).

The second T20I is scheduled to take place at the Melbourne Cricket Ground on November 23. Will the Indian team make amends or not is for time to tell. For latest updates on India vs Australia 2018-19 Series, stay tuned with LatestLY!

(The above story first appeared on LatestLY on Nov 22, 2018 04:48 PM IST. For more news and updates on politics, world, sports, entertainment and lifestyle, log on to our website latestly.com).