The incident occurred in the final delivery of the fifth over. South Africa had raced to 30 runs in just four overs with Dean Elgar and Markram taking apart Hasan Ali and smashing him for five boundaries in his first two overs. Afridi bowled a good length ball and Markram tried to defend but the ball took outside edge and flew to the slips. 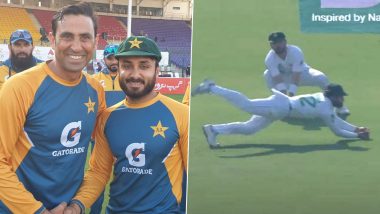 Imran Butt took a sensational catch at second slip to remove Aiden Markram on the opening day of the first Test between Pakistan and South Africa. Butt, 25, is making his debut for Pakistan national team after impressing in the 2019-20m Quaid-e-Azam Trophy tournament. He took a sensational diving catch to get the first breakthrough for his side and give them a good start in the Test. Butt took the catch off Shaheen Afridi’s bowling. Is Pakistan vs South Africa 1st Test 2021 Day 1 Live Streaming Online and Live Telecast Available on SonyLiv and Sony Ten Channel?

The incident occurred in the final delivery of the fifth over. South Africa had raced to 30 runs in just four overs with Dean Elgar and Markram taking apart Hasan Ali and smashing him for five boundaries in his first two overs. Afridi was bowling from the around the wicket and bowled a good length ball angling away from the batsman. Markram tried to defend it but the ball took the outside edge and flew straight to the slips where Butt took a stunning diving catch at second slip.

The ball was moving towards the right slip but Butt dived and took a great low catch to get the wicket. From the position he took the catch, it looked like the ball would have fallen short of the first slip fielder had Butt not dived and plucked it quickly low into the ground. Take a look at his video.

What an awesome catch by Imran Butt!

He’s the second slip dives full in front of first slip to take a very low catch! Not catchable for first slip!#Shaheen strikes in his 3rd!

South Africa, meanwhile, opted to bat first after winning the toss and were off to a quick start before Afridi removed Aiden Markram. Rassie van der Dussen was then run out after a big mid-pitch confusion with Elgar leaving him short of the crease. South Africa went into lunch with Faf du Plessis and Elgar at the crease.

(The above story first appeared on LatestLY on Jan 26, 2021 01:36 PM IST. For more news and updates on politics, world, sports, entertainment and lifestyle, log on to our website latestly.com).