KL Rahul and Rishabh Pant were the stars for India with the bat in the second game. Rahul struck his fifth ODI hundred and stitched a 113-run partnership with Rishabh Pant, albeit in a losing cause, to help India post 336 run on the board after they had been asked to bat first. Pant also shone in his return to the Indian side. 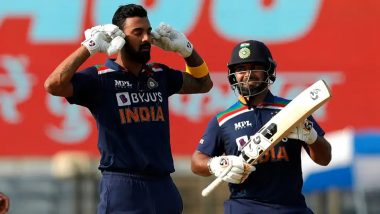 After a defeat in the second game, India will have another chance to clinch the three-match ODI series and complete a series sweep, when they host England in the third and final ODI match of the series. India started the three-match ODI series with a 66-run victory in the opening game but were beaten by six wickets in the second match that helped England tie the series and make the third ODI meeting a series finale. India have already beaten England 4-1 in the Test series and 3-2 in T20Is and are aiming to complete a series sweep. Meanwhile, take a look at the probable India playing XI for the 3rd ODI match against England. India vs England 3rd ODI 2021 Preview: Likely Playing XIs, Key Battles, Head to Head and Other Things You Need To Know About IND vs ENG Cricket Match in Pune.

KL Rahul and Rishabh Pant were the stars for India with the bat in the second game. Rahul struck his fifth ODI hundred and stitched a 113-run partnership with Rishabh Pant, albeit in a losing cause, to help India post 336 run on the board after they had been asked to bat first. Pant, who was making his return into the ODI team after some time, smashed a 40-ball 77 and looked good for a maiden ODI hundred before he was dismissed by Tom Curran. Captain Virat Kohli also scored a half-century while the Pandya brothers played handy cameos but the bowlers disappointed and failed to defend the total. Yuzvendra Chahal, Suryakumar Yadav and Washington Sundar! Fan Decodes Wasim Jaffer’s Message for Virat Kohli To Pick the Indian Playing XI for 3rd ODI.

India’s spinners were taken to the cleaners with Krunal Pandya going for 72 in six overs and Kuldeep Yadav conceded 84. Neither picked a wicket while Shardul Thakur also proved costly. Prasidh Krishan took two wickets while Bhuvneshwar Kumar took the other wicket.

Openers: Rohit Sharma has had a disappointing ODI series so far with scores of 28 and 25. He will need to score big if India are to clinch the series. Shikhar Dhawan missed out on a century by just two runs in the opening match but was undone by a Reece Topley outswinger in the second match. The Indian opening pair have failed to stitch a century-run stand in the series so far and need to give India a good start in the series decider.

Middle-Order: Skipper Virat Kohli has looked great touch in the series and has scored a half-century in both innings. But the Indian captain has not hit an international hundred for over a year now and will want to go break that century drought in the 3rd ODI match against England. KL Rahul has been India’s best batsman so far in the series. With a half-century and a hundred, Rahul is also India’s highest run-scorer in the series. He will look to continue that form and lead India to a series win. Rishabh Pant was playing his just second ODI match in over two years. But the southpaw looked like he had never gone. Pant smashed seven sixes in his 77-run knock. He is yet to hit a maiden ODI hundred.

All-Rounders:  Krunal Pandya and Hardik Pandya will be the two all-rounders in the India playing XI. The Pandya brothers played influential cameos and gave India the end flourish they needed to post a winning target on the scoreboard. Hardik smashed a 16-ball 35 while Krunal scored 12 off nine balls to give India the perfect finish to their innings. Krunal, however, was taken to the cleaners by Ben Stokes, who smashed 28 off Krunal’s over. Hardik did not bowl. Kohli later said it was to preserve and avoid another injury.

Bowlers: Kuldeep Yadav is likely to be replaced by Yuzvendra Chahal in the third ODI match. Kuldeep failed to pick a wicket in the opening two matches. He conceded 68 in nine overs in the first ODI and went for 84 in the second game. The pacers Prasidh Krishna, Bhuvneshwar Kumar and Shardul Thakur are likely to retain their place.

(The above story first appeared on LatestLY on Mar 27, 2021 06:17 PM IST. For more news and updates on politics, world, sports, entertainment and lifestyle, log on to our website latestly.com).