The game more or less has the feel of a standalone game despite all the heightened build-up. A lot has changed with the Indian team in terms of persona and management and it will be interesting to see how India tackle this English team. 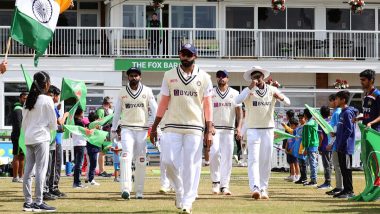 Jasprit Bumrah and other Indian players walk into their warm-up match against Leicestershire (Photo credit: Twitter)

An in-form England side host India at the 5th Test of a series that was postponed by the visitors owing to a coronavirus outbreak. It is the Indian team that leads the series 2-1 which sets up for a fascinating battle at Edgbaston in Birmingham from July 01, 2022 (Friday) onwards. The game more or less has the feel of a standalone game despite all the heightened build-up. A lot has changed with the Indian team in terms of persona and management and it will be interesting to see how they tackle this English team. Opponents England won 3-0 against New Zealand recently and there was never a session throughout these games that the home team completely dominated yet won every match comfortably. This can certainly dent the confidence of any team facing them. Birmingham Weather, Rain Forecast and Pitch Report: Here’s How Weather Will Behave for India vs England Match At Edgbaston Stadium.

England will be led by all-rounder Ben Stokes and he has shown in a short span of time what a dynamic leader he is. James Anderson returns to the squad after being rested for the final game against New Zealand. Alex Lees and Zak Crawley did not have the kind of impact they hoped for in the recently concluded series but they have been given another chance.

Rohit Sharma, India’s skipper, misses out due to covid and in his place pacer Jasprit Bumrah is all set to lead the team. Virat Kohli looked good in the practice game and a lot will ride on the former Indian skipper with England boasting of quality pacers. Mohammed Shami and Mohammed Siraj are both set to feature with Ravindra Jadeja the likely spinner.

England vs India, 5th Test 2022 will be played at the Edgbaston Stadium in Birmingham. The series final will start from July 01, 2022 (Friday) onwards and has a scheduled start time of 03:00 pm IST (Indian Standard Time).

Since Sony Network holds the official broadcasting rights for India’s Tour England, England vs India, 5th Test 2022 live streaming will be available on Sony Network’s OTT platform SonyLiv. Fans can live stream the game by either downloading the SonyLiv app or vising the website and need to subscribe to enjoy the services.

England will dominate this contest from the onset and it will be a surprise if the hosts do not win the match.

(The above story first appeared on LatestLY on Jul 01, 2022 12:31 PM IST. For more news and updates on politics, world, sports, entertainment and lifestyle, log on to our website latestly.com).