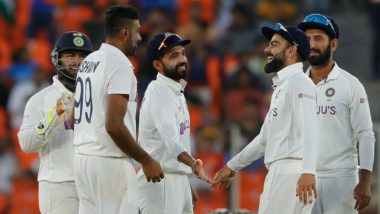 The third Test between India and England at the Narendra Modi Cricket Stadium took just little over four sessions to produce a result. Inside two days India defeated England to make sure that it became the shortest completed Test since the Second World War (1939 to 1945). 145.2 overs were bowled in the New Zealand vs Australia Test match at Wellington in 1946 to produce a result and now the India vs England day-night Test saw just 140.2 overs bowled as the home side chased a paltry target of 49 in just 7.4 overs. India vs England 3rd Test 2021 Day 2 Highlights: IND Beat ENG by 10 Wickets, Lead Series 2-1.

On day two of the Test a total of 17 wickets fell with India taking ten of them. Spinners Axar Patel, Ravi Ashwin and Washington Sundar shared all ten wickets between them. While Axar picked five wickets, Ashwin scalped four and Sundar chipped in with one wicket.

The shortest completed Test still remains the Australia vs South Africa in 1932. Only 109.2 overs were bowled in that Test though. Interestingly, the third Test between India and England now is the shortest completed Test in India, surpassing the India vs Bangladesh in 2019. Ravi Ashwin Becomes Fastest Indian To Pick 400 Test Wickets; Sachin Tendulkar, Suresh Raina, Virender Sehwag Congratulate the ‘Spin King’.

Shortest Tests in post-war era ending in a result (balls)

With this win, India now lead the four-match series 2-1 with one game to go. The defeat for England means they are out of the World Test Championship final while India need a win or a draw in the fourth Test to advance.

(The above story first appeared on LatestLY on Feb 25, 2021 08:40 PM IST. For more news and updates on politics, world, sports, entertainment and lifestyle, log on to our website latestly.com).